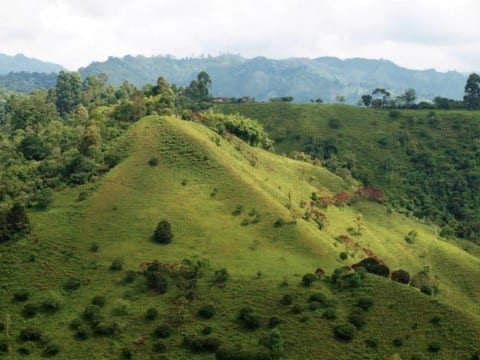 What would the planet be like if ⅔ the surface were land instead of water?

Many have wondered this, and beyond asking, what if all the water dried up?  Researchers in Australia have ”mapped the oceans and compiled the information” into one picture of the seafloor. This answer is just my imagination running wild.

The world would be completely different is it was ⅔ land. When I think of this, I imagine one giant landmass with pockets of water on the surface. There wouldn’t be separate continents. The climate would be severely affected. Evolution would have been affected because for some species, it was necessary for isolation on continents for the to evolve. I see a new range of animals, since migration across the land is possible.

Then I think about humans. How would we be affected? Well, I think cultural lines would be more blurred. I see one main language for all humans. I also imagine many wars over the little water left. Another major issue I think of is how the climate would change. I suspect that the overall climate “would have a drier atmosphere, but [it] might not be a desert.” There would be fewer large trees from the lack of surface water and an abundance of grassland plants. I also think that there would be different species that are better adapted to having less water. They would be like camels in the way that they can go long periods of time without water.

Juliana, nice insight of a theoretical scenario. I also agree that the world would be connected, meaning that ecosystems, evolution, climate, and humans would have been severely impacted. In addition to what you included, I think that modes of transportation and technology would have changed. For example, because of there’s less water, meaning smaller oceans, ship building would be less developed as it is right now, whereas flight and land transportation would be further more innovated. There was one part that differed from my view. There might be a significant decrease in water overall, but the ocean will still retain its salinity, leaving me to assume that freshwater would still be the same. Still, your point of view is also a possibility. Nice job on your piece.