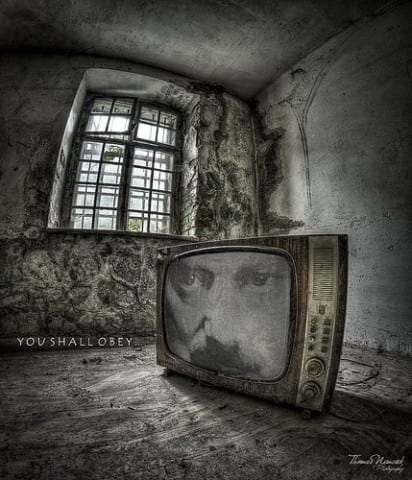 All dystopian novels have certain attributes in common: oppressive governments, propagandist mass media, restrictions on free thinking. All of these common traits are meant to be used as commentary on contemporary culture. In George Orwell’s 1984 big brother is meant to criticise the totalitarian regimes in the fifties and Margaret Atwood’s The Handmaid’s Tale is meant reflect the treatment of women throughout history. The trait I find most interesting in dystopian literature is the presence of addiction used to mute the characters desire for free will.

I don’t believe that George Orwell was worried by the alcoholics living behind the Iron curtain and he shows no concern for the additive quality of Winston’s cigarettes. Instead he is frustrated by their strict ration and by the tendency for the Tabaco to fall out.  The characters in Aldous Huxley’s A Brave New World constantly take a drug called soma. The soma is never described as a high or a trip but as a way for them to handle the realities of the very harsh world they have built for themselves. And in Ray Bradbury’s Fahrenheit 451 Montag’s wife nearly overdosed on her sleeping pills without realizing it was her own suicide attempt.

I don’t believe that all of these authors feared the increase of drug use. I think they feared oppression of free will however that takes form. I think they believed a need to avoid reality would accompany a repressive culture. The shift from use to abuse occurs when an addict need to drug in order to feel normal. An addicts brain crosses a threshold when their brain can no longer produce the amount of dopamine it needs. It is found that those who suffer from depression are at a higher risk for substance abuse, and over half of PTSD suffers also struggle with drug addiction. I think that these dystopian novels use drug abuse as a literal representation of the suppression of free and individual thought.

Missy,
This is an incredible post! I can tell you put a lot of thought and research into writing this post. I really like how you referred to other texts for other examples and proof. I found an article that asks whether or not drug abuse is increasing or decreasing in society today http://www.drugrehab.org/is-drug-abuse-increasing-or-decreasing-in-the-u-s/
I hope you continue to write more about this topic.