Drone Technology: Has it Gone Too Far?

Home Drone Technology: Has it Gone Too Far? 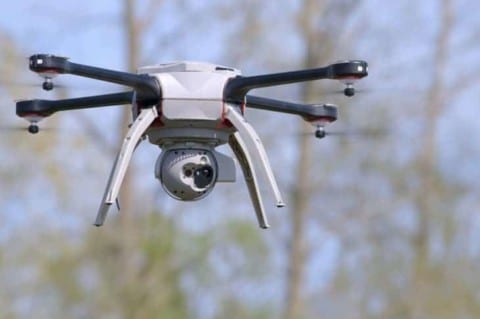 Today’s day and age is obsessed with technology. It fills every moment of our time. The average person spends five total hours checking their phone. This could range from texting to web browsing to playing games. That is five hours that you will not get back each day that you live. This obsession with technology has us asking, what is next for our society? How will our lives be changed next? One example that I can think of is the iPhone 7. Another example is the use of drones. The iPhone 7 is considered to be a big release while drones have been in existence since before George W. Bush was president. Even though they have been hovering in the background, they will make their breakthrough onto the global stage. I think that their day has come.

This summer, there was an incident involving a “terrorist” and police in Dallas, TX. As reported by National Public Radio, the headline reads “Bomb Robots: What Makes Killing In Dallas Different And What Happens Next?” The article started by informing the audience that the Dallas police force killed a U.S. Citizen in a shootout with a drone that they had on hand. Usually, they use drones for democratic actions instead of lethal actions. The officers attached C4 to the drone and flew it up to the shooter. At that point, the officers blew up the drone, killing the shooter and ending the confrontation.

The reason that I mention this specific piece is found in the heart of the article. This is the first time in recorded history that a drone was used in the police force to intentionally kill someone. Remember what I said earlier? Will the drones have a breakthrough onto the global stage?

Here it is and it had a relatively negative debut. This is a very big issue with drone use and it leads us to questions.
Should we use drones in the police force?
Should we use drones in the military?
Should drones be not used at all?
These questions and more will be answered in this paper in the professional opinions of a high school senior. Using drones for military use is unethical and disrespectful in the aspect of war because this fight in the middle east is just a skirmish unless there are people ready to die for their cause.

A report made by ABC news that was published on February 6, 2013, notes that drone strikes in the middle East “creates more terrorists.” The American drone strikes are not weakening the anger towards our country. In fact, they are getting stronger by the minute. The whole point of the strikes in the Middle East was to kill off terrorists that were threatening America. We were specifically looking at the heads of the organizations. Through the actions that we have taken, the number of terrorists have decreased slightly and then increased again. The terrorists that have been taken out are just getting replaced by others ready to do the job. This is a pointless cycle that will never end while we are using drones to do the dirty work.

A 60 Minutes news report informs us that, when referring to the drone strike teams, “The fight for the pilots is on a video screen.” How can this possibly be considered a real war? If you are fighting someone on a video screen or a TV, you are playing a video game. The pilots will not know the full extent of their actions. Some of the videos showed real-time actions made by a pilot. We were able to see a convoy that the Air Force was following and witnessed the pilot blow up one of the cars to smithereens. I think that this is a very unethical approach to warfare. If these types of actions continue in the future, the pilots will get used to the routine. They won’t understand that they are fiddling with people’s lives when they pull the trigger. It’s not a game. It’s reality and warfare is not a game to be taken lightly. If you are going to declare war on someone, there is a reason for the declaration. There is a cause behind it, there is some reasoning. If a country is not willing to risk their lives to protect their cause, it is just a skirmish and nothing more. That is not considered war.

Sticking with the topic of unethical force, I would like to address the Dallas shooting that I mentioned earlier. The NPR article has a report from the police officers that says, “we saw no other option but to use our bomb robot and place a device on its extension for it to detonate.” I think that this is a bit of a stretch. The police have been using drones for quite a while. Some of them have pepper spray on them or something similar. It has never had a lethal weapon before. In my opinion, there were other routes the officers could have taken. I would have incapacitated him with a drone and then sent backup to take care of the guy. There were other ways and they decided to just kill him. That is unethical. The officers do not have the right to decide who gets to live and who gets to die. I say take the drones out of the military force.

There are people that disagree with my viewpoint. One argument is the fact that the use of drones in the military will save lives rather than sending in soldiers. Remember the days of the Civil War when there were 620,000 deaths. What would happen if we could conduct war without losing any lives? Would that world not be the best and most peaceful? The answer is no. The world would adapt to this new way to wage war and we would be bombed every day. The conflict between countries would increase and some countries would disappear completely. Deaths would skyrocket because the people behind the drones will not understand the consequences of their actions. Eventually, kids will get to this tech and be able to kill people without a second thought. Do we really want a world where this happens every day?

I do not completely hate drones. I have reason to believe that they are the newest way to deliver packages and to advertise for small businesses. The only thing that I would insist on is regulations for the drones. They need to be controlled so that they are not used for purposes other than what they were designed for. Drones are not to be taken lightly. In the wrong hands, they can be a very deadly weapon. In the right hands, they are an energy-efficient way to deliver products.

In conclusion, the technology that we have is advancing very quickly, perhaps too quickly. Some tech is being used in a way that has not been analyzed to its full extent. I think we need to examine every piece of the puzzle before making an executive decision on how to use it. This technique needs to be applied to the drone issue. We need to make sure that everyone knows what the consequences will be if we continue to use drones in the military to bomb other countries. The world will end up being a place where the people without money will die at the hands of the wealthy people. Countries will disappear and lots of people will die. Using drones for military use is unethical and disrespectful in the aspect of war because this fight in the middle east is just a skirmish unless there are people ready to die for their cause. Drones are changing the way that we fight wars, deliver packages and control mobs. We need to make sure that drones do not get out of hand or taken for granted.