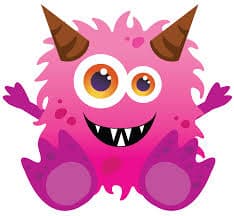 Once upon a time there lived two monster, brothers to be exact.  The oldest, Boo Blue was as sweet as could be.  Some even said that he was so sweet his body was made of pink bubble gum flavored cotton candy.  The younger brother, James Mike, named because of his similar appearance to Mike Wazowski and James P. Sullivan from the movie Monsters Inc.  Now Mike was a bit more sour than his elder brother, but still just as lovable.

One day Boo Blue came along.  Boo told Mike that all he had to do to become as sweet as him was to wrap himself in sticky cotton candy.  Mike, being younger, decided that would be a great idea, so he went and got all the cotton candy in the village that he could find and wrapped himself all up in it.  Mike is all wrapped up and very sticky from all the sugar.  Boo begins to realize that Mike has become sticky and begins to laugh like crazy.  At this point Mike see that there was something going on and asks Boo.  Boo still laughing exclaims that he was playing a joke on him. Mike being a jokester himself falls over laughing.  Boo continues laughing so hard he falls on Mike and become just as sticky.

Aww this story is so cute. I like the fun names, and the difference between the two brothers, on one being sweet and the other being sour. I also like the ending that Mike laughed along with the fact he got pranked instead of getting angry.