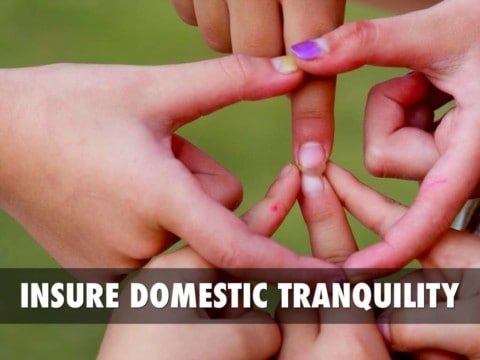 An important purpose of our government, as stated in the Preamble of the U.S. Constitution is insuring domestic tranquility.  The president of the U.S. plays an important role in ensuring our government’s actions are working toward this goal. Among the most significant presidential powers that can insure domestic tranquility are the appointment powers, chief of state, and commander in chief.  President Trump’s decision on who can and cannot join the military helps us understand the importance of commander in chief because of how well it works to achieve the purpose of insuring domestic tranquility.

The appointment power is all about the power given to the executive branch and the President to appoint federal officials. So, what this means is that the President has the power to appoint federal judges, ambassadors, and other “principal officers” if needed. Which by the way has to be confirmed by the Senate. The Senate has the power to reject or accept anyone who has been nominated for a position by the President or executive branch. Having the Senate there to basically make the call and be responsible for who they accept or reject is what is needed to preempt tyranny. Along with the power to make calls on who our public officials are the President also has to maintain the role of Chief of State.

Chief of State basically means being the ceremonial figurehead. Whatever the President does is closely watched and advertised because after all he is the symbol of all the people. So, when natural disasters happen what is usually a common thing to do for someone who is the President, is to go to the site and pay respects. While we are on the page of being the face of the country. The Queen of England is the ceremonial head for her country, but, although being the face of England she does not make any political calls. As for the President of the United States, he or she, is both the decision maker and ceremonial figurehead. Now, getting into another role that the President holds, which is being the commander in chief.

President Trump has banned transgender people from enrolling into the military. This call actually had me speechless because I could not believe he would prevent people from enrolling into the military. People have the right to protect their nation and I do not understand why he would have people, who chose to live their lives a certain way, not be allowed the right to serve. Banning transgender people does not insure domestic tranquility because if he honestly wanted us to be safe he would allow anyone who wants to protect and serve, do so. So, as I have listed all these three powers and roles that the President has, I believe this last one is most important.

In conclusion, the most significant presidential powers that can insure domestic tranquility are the appointment powers, chief of state, and commander in chief.