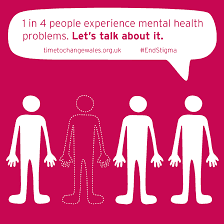 According to MentalHealth.gov, “If you have, or believe you may have, a mental health problem, it is helpful to talk about these issues with others. Learn more about building a strong support system and developing a recovery plan.” To me, a person who has experienced a mental health illness, I have found more strength in my road to happiness when i have talked to others whether it be a therapist, family or friend, that by simply talking with them about my experiences it has opened more doors, and allowed me to start to recover. Recently I conducted a survey and found that almost 98% of the people feel like they have someone to talk to about Mental Health. This is surprising to me, due to the fact that mental health, especially suicide is seen as such a negative and unpleasant thing in our society. Many people feel that talking about suicide glorifies the actions of the victims, gives the wrong message about why they ended their life, or simply the rumors of how they did it. But at the same time according to my results people feel like talking about mental health is seen as a bad thing in our society. They feel scared that people are going to think differently of them, that its a sign of weakness and people with mental health can’t function properly. Which is incorrect.

Yes we are starting to get away from the fact that its not seen as a bad thing to talk about depression, but we have also come into a culture where it is acceptable to be depressed, or if you’re having a bad day to say you want to die, or that something gives you anxiety. They are all valid emotions, but when people say these over and over it desensitizes the value of what its like to live with a mental illness and to actually be depressed or live with anxiety.

We need to change these stigmas and start seeing people for who they are, and not what they live with.

Hi Caleigh
I like your letter it was really interesting how it stated a lot of facts and information about mental health and how it affects people. You did really great you got the point out there. this is very helpful for people who are suffering.

Hi Caleigh!
I really likes this, I could really feel what you were trying to say thru your writing. I agree with the fact that this shouldn’t be something that people are embarrassed about.

Hi Caleigh ,
I really enjoyed your writing on Mental Health Stigmas. I feel very similar to how you feel being that we should all just talk about these problems instead of it being such a bad thing in society. I feel a lot more people suffer the same way but refuse to get help because society puts a huge red X over speaking freely on this topic. Thank you for writing!

This could be very helpful for people with problems. Pls share it if you can

Thanks for writing this out.