Does SpongeBob make you dumber?

Home Does SpongeBob make you dumber? 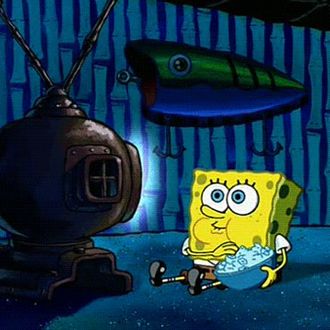 Watching SpongeBob makes preschoolers slower thinkers.  Or at least that is what one study suggests.  A research study looked at 60 four-year-olds that completed different cognitive and delayed gratification tests after watching different stimuli.  The study concluded that kids who watched SpongeBob had significantly lower scores on the tests than the kids who watched a PBS show.  The researchers attribute this response to the fast-paced nature of SpongeBob, which “switches scenes on average every 11 seconds, as compared to the PBS cartoon, which switched only twice a minute”, as well as the fantastical nature of the show.  This, in turn, made the kids less focused and more distracted (Hutchinson).  (However, as suggested by Nickelodeon, the study only targeted a small demographic and an age range that is not the target audience of SpongeBob.)

But SpongeBob is not the only digital media that has this effect.  Other studies with different media sources say that their influence on development is detrimental by decreasing attention spans.  But other studies say that these same media sources are preparing kids well for a world that is full of technology and fast-paced information.  Any thoughts, experiences, or opinions on how media has affected your/another person’s development? Was it positive or negative?  Do you think the fast-paced media of our age is positive or negative as a whole?

I don’t think that Spongebob or fast paced cartoons necessarily make kids “dumber.” Since the four year olds took the tests right after watching the videos, their mind could have still be on the cartoon instead of focusing on the test, so results could be different in the long run. The PBS show they showed them could have been boring to them, so they did better on the tests.

Something that really caught my attention was the title. The reason for that is because I personally don’t believe that the show Spongebob can really have a major impact on many children’s thinking. What if they are just watching the show because that is what they love to watch? In fact, have you ever stopped thinking that many children can learn something from the show? Like for example, they can learn how to be kind and don’t let anything upset them. Another thing could be never giving up when things get difficult. At the same time, they are getting a laugh out of the show.

Dear Alex,
﻿
I am surprised by your post, “Does Spongebob make you dumber?” because I didn’t think a show affected kids in a bad way. I thought a cartoon show was simply for a kid to get distracted watching what they like to watch.

One sentence that stands out to me is: “The study concluded that kids who watched SpongeBob had significantly lower scores on the test than the kids who watch PBS shows.” I think this is interesting because the shows that kids watch do really matter.

Thanks for your writing. I look forward to seeing what you write next about cartoon shows and how it affects kids in a negative way. I would like to keep reading because all this is new to me.

I am interested by your post ¨Does Spongebob make you dumber?¨ because I never thought that watching a show will have an impact on your development. Its shocking that watching spongebob has made kids slow thinkers. Spongebob isn’t a very educational show so I see why it would make kids slow down their thinking and development.

One sentenced that you wrote that stands out to me is: ¨ The study concluded that kids who watched SpongeBob had significantly lower scores on the tests than the kids who watched a PBS show.” I think this is predictable because most PBS shows are educational and teach kids something, where as Spongebob is more for entertainment.

Thanks for your writing. I look forward to seeing what you write next, because its interesting to know that a show I used to watch as a kid has an impact like this one. I also liked how you took into consideration children’s learning development seriously.

Alex, I think that the claim of SpongeBob making people dumber is really interesting. I never thought about TV shows causing learning challenges. I personally don’t think that this study is valid, there was a small selection of kids (60) and they were all the same age (4). I think it would be interesting to look at teenagers who watched SpongeBob as kids, and see how they’re doing academically.

I appreciate your examination of the study however I frequently watched SpongeBob as a kid and find myself usually scoring within the 50-60 percentile of standardized tests meaning that I am smarter than most. I am also capable of watching Rick and Morty with 100% attentiveness. While I appreciate the attempt this post really missed the mark, better luck next time. Maybe next time try not to sounds so Patrickesse.

I was very interested in this topic. I think it is very interesting that a show could possibly make you dumber. “Studies say that these same media sources are preparing kids well for a world that is full of technology and fast-paced information”. Kids might get confused and feel that the fast paced information is too much for their young brains, which can confuse them.

I don’t understand how something as simple as a kids tv show can effect someone so much. I don’t believe that it affects you positively or negatively. If it does affect you at all, it would affect you positively in a happy mood sort of way.

I have never thought about the possibilities of the switching of senses in a show could effect the development of a child.You mentioned that “Other studies with different media sources say that their influence on development is detrimental by decreasing attention spans” which caught my attention. I defiantly see how some shows can effect how a child develops based on the content, however I never thought it could be the senses could also play effect.

I have a younger sister who watches more Nickelodeon, Youtube, and Disney channel. Comparing it to myself I watched more PBS than anything. I have noticed that her sense of understanding and actions come from all the shows and videos she watches. When she was younger it was different compared to now because of the fact that videos and shows have become more aggressive in a way. I think that as time goes on and technology further develops the younger generation will be in danger if they are left to learn from these kid shows.

Thank you for the information you have provided. It has helped me better understand these shows and to explain to family the reasons letting these shows teach our kids could be dangerous. I look further to read more of your writing. You made it very easy to understand the topic you are writing about while keeping it interesting.

I think that it all depends on everyone. Just because watching a show isn’t going to make you smarter or dumber. I think that everyone has there own perspectives of each different things. If paneers dont agree on things in the show or have different opinions on being good than they can still go with it.

Dear Alex,﻿
I am shocked by your post, “Does Spongebob make you dumber?” because it is surprising how something as simple as watching a show can affect your development. Without a doubt, some shows are more informative than others but it is such a minor role that plays in someone’s life.

One sentence you wrote that stands out for me is: “Other studies with different media sources say that their influence on development is detrimental by decreasing attention spans.” I think this is conflicting because technology is something that is extremely important in our generation. If there are negative outcomes that will affect our future, it will become a difficult thing to monitor. Things are getting more advanced and it makes me wonder if we’ll be able to keep up.

Thanks for your writing. I look forward to seeing what you write next because I am a person who is currently studying the development of children and how their environment will affect their growth. I also enjoy how you added notes at the end, it allows the audience to ponder things on a deeper level.

Dear Alex, I find it interesting that watching spongebob makes preschoolers slow thinkers. I’ve heard people say that but I didn’t know it was true. It is surprising how a show can affect children slow thinkers.
This part stood out to me ” The study concluded that kids who watched SpongeBob had significantly lower scores on the tests than the kids who watched a PBS show.” This stood out to me because I didn’t know that other shows can have an affect on children.

My little brother watches pbs kids and is a very fast learner so it is great to know how their are over channels that can be beneficial not harmful to children.

PBS didn’t affect him. I am in all honors and am a very fast learner and watch spongebob religiously.

Dear, Alex
I am interested by your post “Does Spongebob Make You Dumber?” because it is about children who go to preschool and they think slower by watching it. Knowing that they won’t be able to think in school because they aren’t learning from what they’re watching at home.
One sentence you wrote that stands out for me is”The study concluded that kids who watched SpongeBob had significantly lower scores on the tests than the kids who watched a PBS show.” I think this is true because watching PBS kids show can get children from preschool to learn instead of watching SpongeBob.
Thanks for your writing. I looking forward to seeing what you write next because there a lot of things that could be true about children at preschool. I would like you to continue to talk about things that don’t get children to focus more when they are at school or at their own home.
Christian