Does pursuing research about a potential “gay” gene promote an inherent homophobic bias? 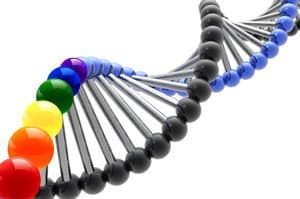 The very real fact of conversion therapy has caused many members of the LGBT community to be skeptical of research for a so-called “gay” gene. During the past 20 years, many research projects have been searching for an explanation for homosexuality. According to James Vincent in his article in The Independent, extensive research is being conducted to find the source of homosexuality, specifically taking the form of a genetic anomaly.  However, Alan Sanders who has been conducting genetic research at NorthShore Research Institute has not “identified a single gene which ‘causes’ male homosexuality in humans and stresses that with complex human traits like sexual orientation there are many influencing factors, both genetic and environmental.” Even though there are some links between

Research on a cause for homosexuality is anything but new. It has taken many forms over the course of history, most recognizably in therapy for LGBT individuals in which they attempted to find a childhood trigger for their attraction or gender identity beyond the accepted binary. In “The Ethics of Genetic Research on Sexual Orientation”, the authors bring awareness to the dangers of pursuing this research. Pointing out that discovering a definite cause for homosexuality implies that there is also a desire to find a cure. With knowledge of a definite cause for sexual preference, many believe that further research may be done to find a way to prevent LGBT people from existing in our world. So, why do we keep pursuing research on something that encourages implicit homophobia?

Similar genetic research has caused controversy in the past with regard to testing for disabilities in unborn children. One major example is an increase in people aborting their babies that have been diagnosed with Down Syndrome.  According to a publication in The New Daily, “about 93 percent of prenatal diagnoses in the state are being aborted.” It can be assumed that with the ability to predict homosexuality, the number of babies given the label “homosexual” that are aborted would increase.

There are dangerous consequences to the discovery of the origin of homosexuality. With the search for a cause, comes the inevitable attempt to find a cure. This would revert thousands of years of social progress and advances toward equality.

This is a very intersting article! I am not very familiar with conversion therapy and this article really enlightened me on the subject. Here is a link to an article that I found that basically just talks about statistics and facts about converion therapy if you are interested. http://www.nclrights.org/bornperfect-the-facts-about-conversion-therapy/

Mariah, I think your article was articulate and very well supported. Your use of statistics made this article comprehensive and easy to understand. Your article was very interesting and I think you did a great job!

Mariah, I found your article very interesting. I found this article (http://www.abc.net.au/news/2018-04-21/gay-conversion-therapy-survivors-on-greg-hunt-comments/9679416) which talks about survivors of gay conversion therapy. It could bring in some more emotion to a very scientific topic. I thought your analysis was very through and made logical sense. I think you did a great job!