“Do you think Robots in the future will enslave humanity?”

Home “Do you think Robots in the future will enslave humanity?” 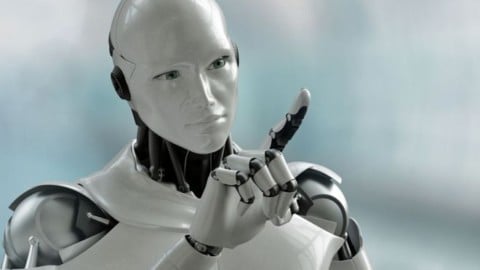 I am Maria Flores I go to school in Oakland Unity High School. In my english class we are reading about robots.
“Do you think Robots in the future will enslave humanity?”
In my opinion Robots will not do no harm to humanity because in my sight humans are the main ones that do harm not robots. In that case robots will be made to help in the future not affect humanity. Jobs that people do robots can do them faster and they wouldn’t really take jobs from humans they would be a lot of help.

For example, there is sources that prove my argument like in the reading, “Robots Dreams?” by Issac Asimov it states, “Elvex, you will not move speak nor hear us until i say your name.’ and again the robot became, to all appearances, a single inert piece of metal” This quote i think it supports my my argument because the robot actually listened they wouldn’t cause no harm to humanity
Another quote the proves my argument is on the writing Is It Ok to Torture Robots? by Richard Fisher It states, “Most of what you do will not be possible without them.” This quote basically says that the jobs robots are made to do is that people cant do that job. These quotes prove my argument because it shows that humans are gonna need robots in the future.