Do dolphins and whales use ultrasound only for communications?

Home Do dolphins and whales use ultrasound only for communications? 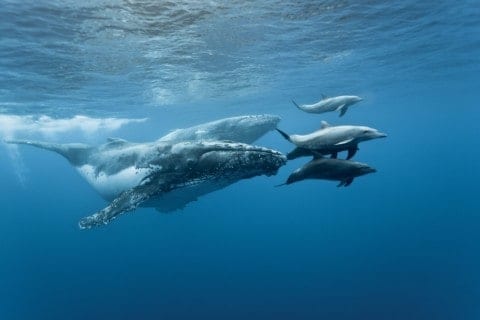 According to the article,’Whales, dolphins, and sound’, the author said: “Sound is very important to whales and dolphins for hunting, navigating and communicating.” “Toothed whales (including dolphins) have developed a remarkable sensory ability used for locating food and for navigation underwater called echolocation. Toothed whales produce a variety of sounds by moving air between air-spaces or sinuses in the head. When swimming normally, the sounds emitted are generally low frequency; the echoes from these sounds provide information about the seafloor, the shorelines, underwater obstacles, water depth, and the presence of other animals underwater.”. According to the journal,’Convert underwater acoustic communication using dolphin sounds’, the author said: “Dolphin whistles were used for synchronization while dolphin clicks were used as an information carrier. The time interval between dolphin clicks conveys the information bits.”

Dolphins and whales use ultrasound for communication, and they also use for hunting and navigating in murky and dark water. Even if the bells that humans use underwater sound like an ultrasound, that doesn’t mean that dolphins and whales can understand the sound of the bell. I watched the video that has the sound of a whale and I thought the reason the whale made a sound is that it communicated with other whales but after reading the article and journal, I realized that they make a sound not only for communicating but also for looking for preys.

Hello mijin,
Dolphin is one of the most smart animals in the world which they have similar way to speak as human. I really like how you explained the uses of dolphin’s sound and compared it with human.
Sincerely,
Orange Zhou.

https://medium.com/predict/john-c-lilly-the-mad-scientist-who-gave-lsd-to-dolphins-e2b7e41e3d6f
This is a paper about John lily. He was always trying to find out how dolphin communicate with other.

I very like your post becasue dolphins is a very smart animal, smarter than humen. It is very interesting to understand how does dolphins communicate. I personally very like them too because they are cute and kind to humen. Nice job! — Clinton Kwong.