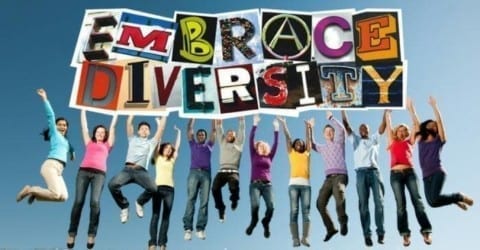 Hello, my name is Kimberly, a student from Cal State Chico University, I’m send this letter to you to talk about this certain topic that has been an issue for the couple of decade. Diversity, is one of the topic I want to talk about. Diversity is the most important thing for young adults who are entering in University. This will give students chances to open up their comfort zone, and meet other people races and cultures.  Diversity can be also be taught for young kids and teenagers,telling all of them to not separate themselves in a certain group or not to discriminating the race or disrespecting someone’s cultures. For me,during high school students from African-American and Latinos are usually in a separate group as if everyone are labels specifically all by themselves. That shows that students taught themselves to not get along each other. Which is bad because we don’t want to live in a separate world with ongoing wars and violence.

Diversity-the state of being different. Which means having people who are different races or who have different cultures in a group or organization. I think that this topic matter right now in the world,because many of the people in United States seem to have a bit problem of divided groups. As if the whole division is an automatic thing for people.Right now there are colleges that are getting diversity in their campus for every students from world-wide.It’s important to teach young adults about diversity because it’s a great opportunity for students future’s. Students will expand their social circle with other various of groups,which is good for their future career too. They have great benefits getting to know various cultures and it’s great when they can travel the world already knowing some things about the country.

The segregation between races is really ridiculous, just because the people of their skins and the way they live can’t be judge if they were born and raised like that, seeing racial incidents will give off a bad vibe for younger students. Making them learn that action is “right”for example,during the old years,whites were raised to be with their same race as well with different other race. Seeing how they separated the young kids and making them adapted to that certain lifestyle. when really it isn’t.Violence and segregation isn’t a way that U.S or any people from another country should learn, instead we should all live together harmony and respect each other. So that is what some colleges are becoming diversity for a great purpose and benefits for young adults. So I’m asking we should make a week or some days where we learn everyone cultural like the way my middle school did when I was a 6th grade, we made a celebration in some classroom that were decorated with the specific race and learning about that country.I think that idea might just bring all the people together and we can learn new things that we would’ve not expected.Under the next paragraph is where I got my thoughts about Diversity.I really hope that this might change a way to have all races and cultures together.I wish you a farewell and to stay great,president.

In the article in a short statement:

Here is the link for more reading :