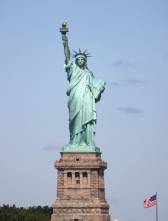 “The American Dream” is a term we hear often as Americans, but what does it really mean? Does it mean you have the highest-ranking job or have the most money? We come to find out that it is actually quite the contrary; the American dream is the quest for happiness and success that can be found in our country.

In the article “In Search of the American Dream” by Jonas Clark from the Atlantic, we learn the origin and original meaning of the term “The American Dream”, Clark states that the term has nothing to do with money or success like we have come to associate it with today. The term was originally coined by James Truslow Adams in 1931 (Clark 1), the term had nothing to do with money equating to success, and everything to do with finding happiness. If we look at the original meaning of “The American Dream”, we can see how our values have changed over the years. We used to equate happiness to success, and now all we place value on is money and material goods. As Americans, we have twisted this phrase into what it is today, and completely lost the original meaning.

In the New York Times article “ What Do You Think Are the Beliefs and Values That Define American Culture?” by Jeremy Engle , we see a recurring theme of meritocracy. A meritocracy is a person or group of people who achieve great success through hard work and talent, rather than social class or money. We can still see many examples of meritocracy in our society today, but far fewer than we did a hundred years ago. This theme and way of thinking have been washed out by our societal standards of success.

The main idea in the film “American Creed”, a PBS documentary, is that everyone can achieve great things if they work hard; regardless of their background or social class. In the film, we hear from many different people of different backgrounds, ethnicities, and social classes. They all have incredibly different stories, but the main ideas are always the same; they all got to where they were by hard work. Most of the people that were interviewed were from underprivileged backgrounds who didn’t have many resources, or were just ordinary people, but they used what they had and found happiness. Happiness to them didn’t include large amounts of money, or the highest ranking position at their job, it included doing what they love and making a positive impact.

This brings us back to the original meaning of “The American Dream”; the idea that success comes from happiness. This is one of the greatest ideas that our country was founded on. To be American means to take the opportunity you were given and make something great out of it.