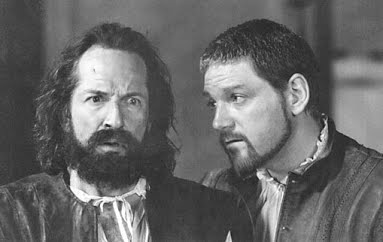 Analysis: When using “civility” the meaning could be being civilized, or in control, where Roderigo is testing Brabantio, letting him know that he should not be comfortable with his state because it is actually chaos. He is saying that things are not civilized but the opposite, barbaric when Roderigo says “gross” meaning monstrous. It could refer to Desdemona becoming so because she is with Othello and “revolt” fighting to be with him. Then again adding “ing” making “revolt” “revolting” something disgusting, showing Brabantio that her daughter had become a disgusting monster, disobeying and “revolting” by just being with Othello.

Roderigo boarded a ship in secret and managed to Cyprus which Iago told him to do. Iago tells him that Desdemona likes Cassio (Desdemona’s friend).

Quote: “[Iago] Mark / me with what violence she first loved the Moor, but for / bragging and telling her fantastical lies. And will she still love him for prating? / Let not thy discreet heart think it-” (Act II.i 235-238).

Iago starts with “mark” to pay attention, note or even perhaps take heed in his words, so what he is going to say next is important. He then continues to say to “mark” him with “violence,” forces that causes pain. “Mark” also means to aim at a spot, so Iago is to be aimed or maybe hit with pain from how hurtful it is to know Desdemona is capable of loving Othello. Othello tells Desdemona “fantastical” meaning imaginary or also marvelous “lies” that is showing she is innocent. Othello, the “liar” is untrustworthy and the guilty. This is appearance versus reality, Desdemona is expecting all these imaginary things that Othello is saying and Iago questions how Othello hold her love is he just keeps “prating” or chattering about it without actually doing anything. He then tells Roderigo (putting him up) that his intelligent, sensible or “discreet heart” to not be fooled by all this (Desdemona “loving” Cassio). So in the end it is verbal irony because Iago is telling Roderigo to not be fooled by showing the “reality” that is just another lie, all of it being the opposite. When you add “ly” to “discreet” it is like keeping the whole situation a secret, or avoid others from knowing. The rest of the characters are blind to his actions and do not see his real appearance, even when working in his favor like Roderigo.