Home Not Your Mascot 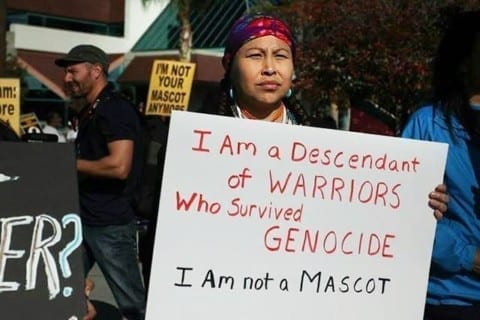 In this artifact I put an image of a football field with the Washington Redskins mascot symbol (before they changed their name). This is saying that Native people shouldn’t be used as mascots because it is dehumanizing and blatantly disrespectful.  When you see hundreds if not thousands of other sports teams with animals and objects as their mascots, it makes it seem as if they are saying that Native people aren’t human.

This artifact has a photo by photographer Sings In The Timber, and it is depicting an Indigenous person in regalia walking by a more than likely Caucasian person with redskins merchandise.  This is eye opening because you can really see how wrong and uncomfortable it is.  Indigenous people aren’t characters, they are human people.  Many people have come forth and have tried speaking out against this and have said how wrong it is.  People can learn more about this by searching up the photographers name, and looking at other similar pictures and information.

This artifact has an image of an Indigenous person holding up two middle fingers with images of different redskins logos on them as the main focus.  This is implying that Native people are not on the side of the teams with these names, and are actually very against it.  In the person’s face, you can see that they don’t look too happy, and this explores the point further that they do not support the use of the terms.  Below the image is a hashtag in the middle of a half-circle with the words “Notyourmascot”  which is a hashtag used to speak out about this issue.  To learn more about this, you can just type in the hashtag on Instagram.

Dear Jennifer,
I think that your argument, along with these images makes for a really compelling argument. For me, the top image is the most powerful because of the message that the woman on it is trying to convey. She’s saying that her ancestors were fighters and survivors, and they didn’t fight so hard just to be the mascot for a team that has nothing to do with their people.
One of the sentences that you wrote that really stood out to me was when you said “When you see hundreds if not thousands of other sports teams with animals and objects as their mascots, it makes it seem as if they are saying that Native people aren’t human”. I thought that this was really well put because by using the Indian as a mascot, it sort of reduced their people to something used for entertainment.
Another sentence that I liked was: “This is eye opening because you can really see how wrong and uncomfortable it is” when you were talking about the image of a Native American woman walking by a woman with a handbag and shirt with a Native American on it. I thought that you brought up a good point, that it’s really weird that people use the face of the Native Americans as a symbol for something that they don’t stand for, like a sport.
You should take a look at this article. https://www.creativebloq.com/news/mock-cleveland-indians-logos-highlight-racial-double-standards . It takes a look at the racist depiction of Native Americans as mascots by making other races into a similar-looking mascot. By seeing all of these races stereotyped in the same way that the Native Americans are, it just re-opens your eyes to how messed up the original one is.
Thanks for your writing. I thought that the images themselves were very moving, and your analysis of each one really added to the message of the project. I look forward to seeing what you post next.

Dear Jennifer,
I am glad about your post, “Decolonizing Research Project” because I feel like this topic isn’t receiving much attention to the public about Native American History and the history with the Indigenous. One sentence you wrote that stands out for me is, “This is implying that Native people are not on the side of the teams with these names, and are actually very against it”. I think this is a message on the Native Americans because you showed us that these people are being affected by team names like “Redskins”. Have you seen this article? https://www.nytimes.com/2020/07/13/sports/football/washington-redskins-new-name.html
I thought you might be interested in this because recently the Washington Football Team decided to drop it’s name around this year in June. Thanks for your writing. I look forward to seeing what you write next because your good at analyzing the images that represent this topic on decolonizing Native Americans in today’s society. Hopefully we see another topic addressing these types of issues today.