Death Penalty at the door

Home Death Penalty at the door 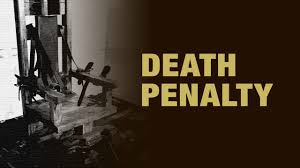 What are your thought on the death penalty?
0
Please leave a feedback on thisx

I think that the death penalty is not right but most of all that no one should die because someone give them a death sentence. No matter what a person has done they should not be sentenced to death because it is cruel and you are giving them the easy way out. But most of all no one should have the right to choose where someone live or dies because it is inhumane. Also the government is giving way too much power to one person that can take advantage of that and believe that they are more than what they really are.

I am intrigued by your post, “Death Penalty at the Door,” because society’s changing perception of the death penalty is a great example of the change that has occurred over the past decades. The world is starting to become more and more forgiving, looking for ways to redeem people as opposed to the harsh world that previous generations have lived in. It also does not help that the system makes a point of targeting POC because as we’ve seen in the past few years, people are sick of this discrimination and will stand for it no longer.

This is supported by your sentence that states the public opinion of the death penalty has changed seeing as “in 1994, 80 percent of the people supported death penalty’s and now only 54 percent of people support it.” This is important because it shows us that in just 2 decades a whopping 26% of people have changed their opinion on the death penalty that has been around for so long. As previously stated, the world was a lot harsher, opting to punish people a lot more severely in an effort of teaching them a lesson instead of investing in programs to help redeem criminals. Of course, I understand that the majority of criminals on death row are of the most irredeemable class of humans, but years and repetition change people, if they were allowed to live out the rest of their lives in prison there may have been some different outcomes. Only time could tell.

Thank you for your writing, Dulce. I look forward to what you may write in the future because ethical dilemmas are very intriguing to me. Thank you.

I am impressed by your post, “Death Penalty at the Door,” because it is and issue that can be really controversial since a lot of people have diffrent perspectives on it. I agree with a lot of the things that you talked about and how it can be unfair.

One sentence that you wrote that stand out to me is, “death penalty being discriminative toward African Americans because they make up 14 percent of the U.S. population but there are more than 40 percent of them on death row.” I think this is really important buecase states are not  being jsut and now they are discriminating against African Americnas and states should not be given the such a big desition since theu can take advantage of it and do inhumane things.

Thank you for writing. I look forward to seeing what you write next, because this is a topic that should be talked about more and the injustices that happen everyday.

I am supportive of your post, “Death Penalty at the door” because I agree with many of the things you talked about, such as the inhumane death penalty. As well as the death penalty not being the best option for dealing with prisoners it brings the ethical question of who gets to command death over a person. Its also surprising to learn the number of people in 1994 who supported it.

One sentence you wrote that stands out for me is “…death penalty being discriminative toward African Americans because they make up 14 percent of the U.S. population but there are more than 40 percent of them on death row”. I think this fact is appalling because it goes to show that the system in place of determining who gets the death penalty is unfair.

Thanks for your writing. I look forward to seeing what you write next because this was a relevant topic to the injustices happening today. I also liked that you included statistics showing the difference between past and present opinions.

I’m exasperated by your post,”Death Penalty at the door” because it is such an interesting topic, whether to kill these people. the problem with it is that the law is incompetent, as seen through the stats you gave regarding African Americans and how they face the discrimination of the justice system. for this I think its better to not have it, otherwise if there was no bias against race and no innocent put in it, then id be fine with getting them killed.

A sentence that stood out was,”No matter what a person has done they should not be sentenced to death because it is cruel and you are giving them the easy way out. But most of all no one should have the right to choose where someone live or dies because it is inhumane” I agree with giving them a way out through death, but at the same time who gave them permission to take someone’s life if they took it? well,

it doesn’t matter much, more importantly, I think the problem with the incarceration of innocent people due to the incompetence of the justice and police system is of more value rather than some trash being disposed of.