Home Dear Next President, Have You Thought About Our Debt? 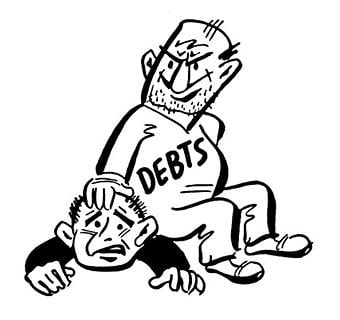 I think that our massive debt is a big problem for our nation as at a certain point it becomes unsustainable. The whole premise of the USA getting low interest loans is that we are good for the money and will definitely pay the loan back. Once we reach a certain level of debt that certainty is gone and we will receive loans with much higher interest rates. Printing less money would have some negative impacts in the short term as well including increasing the cost of our own debt so I am not so sure that printing less money would clearly help our debt problem.

I agree that our national debt is a major problem but how will we get U.S. citizens and the government to work and be willing to take a risk for a solution?

Joseph & Tyler, I agree our national debt is a huge problem. However, in your piece you didn’t give a solution. So my question would be, how would YOU decrease our debt?

Just like I explained above, if we could decrease our debt, we would limit the amount of cash in circulation. This would allow the deflation as explained as above.

I do agree that our national debt is a crippling issue in the United States. It has gotten to a point where we can only slow down the rate of debt increase rather than eliminating it completely. Good job adding numbers to back up your claims.

I think that this problem is overlooked too often and I agree that the next president needs to address this. You both supported your stance with evidence and also explained what the benefits of fixing our debt would be. Getting out of the massive debt we’re in as a country would be HUGE.

I totally agree with your opinion. The government needs to address this more.

Though an increase in the value of our currency would lower interest and make it easier to pay off our debt in the future, our government would still be deficit spending, so our debt would not recover, but increase, though at a slower rate.

Joseph, I also recognize that our massive debt is often overlooked. Inflation is an inevitable issue, and needs to be addressed more often.