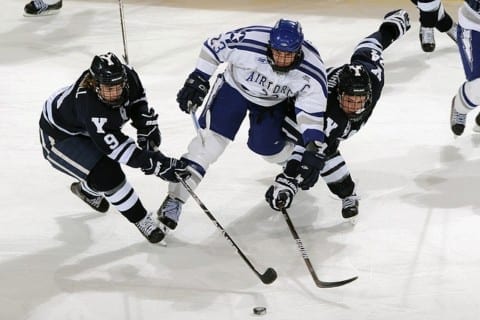 Although it garners less media attention and scientific inquisition, hockey is well known to be one of the most dangerous sports. Concussions, one of the most prominent injuries in the sport, have caught the attention of many scientists and players, mainly stemming from findings based around Chronic Traumatic Encephalopathy (CTE), a disease that affects the patient’s behavior and moods, which occurs after repeated head trauma. Found traditionally in football players, more discovery has allowed scientists to see its effects in hockey players as well. A sport that not only encourages hitting, but also allows for fist fights at many levels, makes for many instances where concussions can be obtained, even at lower levels of the sport. The sheer speed at which the sport is played, makes for many hard collision, even if by accident. Furthermore, studies have shown that CTE may not be the only result from these concussions, and that there are more consequences, albeit less significant, to concussions that may be even more common in players. Although a slightly less known phenomenon, head trauma induced by hockey is a serious consequence to the game, and many of the effects are still unknown.

Despite the sheer violent nature of hockey, I rarely hear about catastrophic injuries in the sport. There is a large emphasis around football and head injuries but little surrounding hockey. I am very interested to see a comparison between those two sports.

Branigan, hockey is most definitely a violent sport, similar to to football. It is not uncommon to end up with a concussion with the speed that the sport is played, the collisions, and the fights. I have never really associated hockey with CTE. I would love to hear more about this issue and what they do to resolve it.

Branigan, I think you make an interesting point that what most people know about hockey is that it’s an aggressive sport. Here is an article that I think you might find interesting https://www.theglobeandmail.com/life/health-and-fitness/health/when-it-comes-to-brain-injuries-how-dangerous-is-youthhockey/article36595825/
Thank you for sharing this artilce I am excited to see what you create in the future.

In a sport that is known and heralded for its brutality, I think its great that you’re drawing attention to the unique brand of danger endemic to the sport. Look into the most common injuries specific to the sport. I’d be interested to know the rate of career ending injuries for professional hockey players compared with other sports.

I think it’s good to draw attention to hockey as a sport that has some pretty serious injuries. As much as hockey is known as a pretty brutal contact sport, more attention is given to other sports. I would like to hear the rates at which common injuries occur in hockey compared to other sports.

I think that this a very interesting topic. I have always associated head trauma with football and boxing, but not hockey. I enjoyed learning about Chronic Traumatic Encephalopathy and I think that you did a really nice job summarizing it to make it easy to understand. I would be interested to learn more about anything that is being done to address the problem such as making changes to the helmets the players wear or even the rules of the game.

Thank you for sharing this information, Branigan. I look forward to reading more about hockey and head injuries.

Hockey is known for hard hitting and injuries. It makes sense that many athletes get concussions. Do you know how many hockey players have CTE? Is CTE more common in one age group than the others? I would like to hear more about this from you in the future.

I don’t know anything about hockey, and I definitely didn’t know how dangerous it can be. I would like to learn more about hockey and the risks that athletes are encountering every time they play the game.