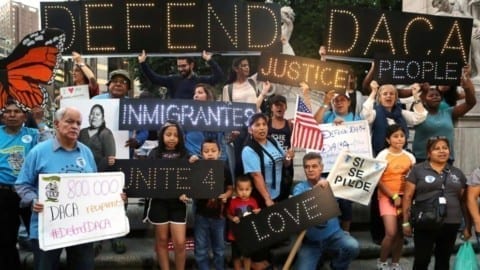 Tech 10-3 (DACA) Evelyn C.D.A.C.A. short for The Deferred Action for childhood arrivals Program is a program that was enacted by former President Barack Obama in the year of 2012. Recently, President Donald Trump along with other Republicans have called for the discontinuation of such a program. This declaration has stirred up many street protests of many latino and non-latino groups to come together in an attempt to support the continuation of the D.A.C.A. program.

This issue is an issue that I am passionate about because like many latino families, it affects my own. The program gives immigrants a sigh of relief without the constant fear of being deported after a long dangerous trail to arrive to the U.S. With this program family members were able to stay in the U.S and have a better education than their own home towns could ever offer. The U.S is the country with this opportunity and many latino families are taking that opportunity. People have worked hard and even those not under the protection know the feeling of getting good results after the work is done. Now, that the program is being discontinued, I fear the deportation of my parents and other close family members.

Before this research, little information was known about who this affected and how they were affected. The information that was known was that many of these participants had to be studying or working in the U.S. This was a requirement for the program to be kept and effective towards a person under the program. If these rules were not kept, it was known that the risk of deportation was possible. It was also known that many of these participants mainly or a high percentage came from the country of Mexico. Mexico had the highest rate. Even though Mexico had a higher percentage, this program also supported other communities of latino people from other spanish-speaking countries such as Ecuador. Of course, non-spanish countries also took part in the D.A.C.A program.

Upon the ending of my research new information was obtained. I learned that the D.A.C.A program was only a two year program and after those two years it had to be renewed again in order to continue its benefits. I also learned that this was not a permanent solution. It was planned to be removed and replaced with a different program that offered the same benefits officially. Lastly, ironically I learned what D.A.C.A stands for. It was always only addressed as D.A.C.A and never its full written out name.