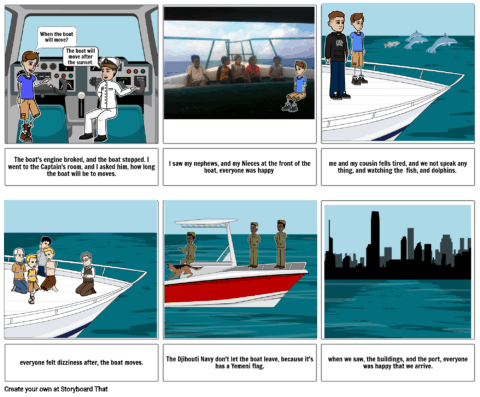 Everyone dreams of a cruise on a yacht, but have you ever thought about what would happen at sea with more than two hundred people on one ship? I fled from the war in Yemen and there was no way but to travel but by sea. The airports were closed and borders with neighboring countries were broken. The sea was the only way out. It was treacherous, and access was impossible. Crossing the Red Sea was the most dangerous experience of my life.

One week earlier, it was a beautiful Friday morning in Taiz. Everyone in the house woke up early to hear the news, because at dawn that day, Saudi Arabia and the Arab alliance had begun bombing our capital, Sana’a. Friday is a holy day for Muslims and was considered a weekend. In addition, all Muslims go to prayer. However, when my brother and I returned home, a military post was targeted. We fell down from the rocket’s pressure, and we were still alone. Upon reaching home, I sat on the sidewalk, and all the shops were closed in my neighborhood. The second missile was aimed at the same place as the first one, and the strength of the explosion broke some windows. The city was getting worse every minute.

After three days, my mother and brother decided to leave after our neighbor’s house was targeted by a falling missile. My mother and my brother are the ones who decided because my father has a mental illness and he has no responsibility for the family. However, our migration was to the village, to my grandfather’s house. We put everything of importance in the car one evening. In the morning we set off for the north. It took us four hours to reach the village. As we are leaving, we saw Taiz as the most affected city in this war. Taiz City was like a city of ghosts, full of emigrants. Armed men were everywhere. The car was loaded with bags on the top and on the back seats. Upon arrival in any city, the children would shout, “refugees, refugees …” But upon arrival, everyone was welcomed. My sister had left a month earlier, But there was no communication in the north. It was impossible to call her, this was a painful moment. But after a week in the village, my brother decided to return to New York for work but this time he decided to bring us all together.

The trip was to the port of Mocha. One of the most famous ports in the world. It took seven hours to arrive. The nearest road was blocked, so we had to cross the western road to reach the port. Out the window, I watched mountains, coffee plantations, and other corps fly past. It was raining that day and the place itself was sad to say goodbye.  Seven hours of travel, and the mountains became farms and then deserts. The ship was scheduled to leave at four o’clock in the afternoon, but there was a mechanical problem and it was delayed until six o’clock, after sunset. We arrived at five o’clock, and surprisingly, there were more than 200 people on the yacht: Women and children on the first floor, and men and boys on the second floor. When the ship disembarked, it shook to the right and to the left, and everyone on the boat was fearful, and the children cried. The trip was supposed to be seventeen hours, but our trip was a full day.

The weather was hot, and no one was not expecting this trip will be like that. I was lying on my back and meditating on the stars because I could not sleep, and the sea was all around me, calm. My nephew and my cousin are asleep as if they were unconscious. At dinner time they gave everyone yogurt and bread, but no one was in the mood to eat. In the morning the weather became even hotter. But I felt better and the water was still calm. I went for a walk to get some fresh air, and I saw the dolphins and fish, but there was no trace of the land.

In the afternoon, passengers discovered the ship was stopped due to a malfunction. However, no one could feel it because everyone felt Seasick, and it was as if the ship was still shaking. The workers lifted the cover to let the engine cool, and we could see everything. This was for half a day, and after the ship was fixed it began to move and swerve again. My nephew threw up more than ten times, and there were many people who threw up too. However, the Djiboutian Navy stopped the ship, because the Yemeni flag was flying. The captain was forced to change the flag to a Djibouti flag, and then we were allowed to pass. When we saw the land, we all joyed, and say, “praise God for safety.” In addition, the US Embassy has learned that there are more than thirty people with US citizenship on the ship, which they received and checked with us.

I am not sure why people always think that I’m not strong, with a small, scared heart, but the reality is on the inside I am a volcano. After four months in Djibouti, my final destination was New York. Because of this experience, I decided to take advantage of the opportunity to learn and use education to reach my dream. For me, the adventure started when I began to show my presence in the school and was seen. The writer starts with a blank page, the painter with an empty cloth, and the musician starts with silence. What distinguishes them from others is that they use their fear and turn it into vitality; they make their nervousness a source of energy. And so, I too turned my fear into a source of strength and determination.

Dear Ishak,
I am inspired by your post, thinking that you and your family had to run out of your own country because of war and because everything was turning inside out, the story make me think about a book I read and also today in my country the same thing is happening not a war between countries but a civil war and now my country turned inside out.
I also like this passage from your story I was lying on my back and meditating on the stars because I could not sleep, and the sea was all around me, calm. My nephew and my cousin are asleep as if they were unconscious. Because I can create the image of trying to sleep while your family is deeply in sleep.
I really loved your story I think it was kind of an adventure.

Thank You so much

Dear Ishak
I am surprised by your post “Crossing The Red Sea” because it looks really good
One sentence you wrote that stands out for me is ” people always think that I’m not strong, with a small, sacred heart, but the reality is on the inside I am a volcano” I think this because people also think that about me too they think that because I’m still a kid and scared and stuff like that but they can’t read us from inside because inside us there is a whole different world.
This reminds me of an experience I had once when I was in Yemen at those days when they were the war the aggression they were Rockets hit and there were somebody parts were in our roof because there was a big explosion in the mountain and our house was under the mountain. Thanks for your writing I look forward to seeing what you write next.