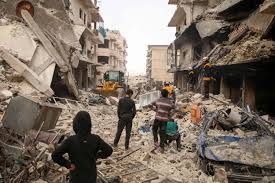 The US had decided to pull out of helping Syria and fight against the terrorist group “ISIS” since 2011. This pullback upended Syria’s 8 year old civil war. The war had killed over 500,000 people since 2011 and displaced half the country’s pre war population of 22 million. Asad was known to rule ruthlessly and harsh crackdowns against his opponents.

The conflict has caused a major refugee crisis. Over the course of the war, a number of peace initiatives have been launched, including the March 2017 Geneva peace talks on Syria led by the United Nations, but fighting has continued. The traditionally tense relations between Turkey and Syria had been due to disputes including the self annexation of the Hatay Province to Turkey in 1939, water disputes resulting from the Southeastern Anatolia Project, and Syria’s support for the Kurdistan Workers’ Party and the now-dissolved. Diplomatic relations between Syria and the United States are currently non-existent; they were suspended in 2012 after the onset of the Syrian Civil War. Priority issues between the two states include the Arab–Israeli conflict, the Golan Heights annexation, and the Iraq War.

I think that it is important that people recognize that this is still happening. I feel like this left people’s minds the minute it wasn’t on any news networks and that isn’t okay. These people are still suffering and it isn’t okay that they were essentially abandoned by the rest of the world. I know quite a few Syrian people who have become hopeless when it comes to the situation in their home countries. Many of them don’t ever think they’ll be able to return home. It is disheartening to say the least. Do you know of any ways to still help or if their is still anyone in the area still attempting to assist them? I hope you keep posting on this topic.

I know that relations between the Syrian and U.S governments were suspended in light of the start of the Syrian civil war but according to this article I found from BBC News https://www.bbc.com/news/world-middle-east-35806229, where since 2012, the U.S has given non lethal assistance to rebel groups in Syria who want democracy in their country under a different president. They have also joined an alliance with Arab and Kurdish militias to capture land claimed by ISIS terrorists. I feel that the U.S should offer more support to Syrian refugees because they definitely had an impact on the country in the aftermath of the Iraq War. It was interesting how you connected other issues in the Middles East to the turmoil in Syria.

I found it interesting how you wrote about the Syrian-Turkish relations. I always knew they were sour, but I never knew quite how far back and intense their rivalry was. I remember at some point last year, when U.S. troops left Northern Syria I believe it was, and later that week the Turkish military came down due to the Kurdish presence in the area. I’m wondering how Syria’s relations have gone with other nations, or the Kurdistan Independence Movement in the region. I saw this article and thought it could answer this question (https://www.atlanticcouncil.org/blogs/menasource/the-gordian-knot-of-kurdish-unity-talks-in-syria/). I’d like to read more on the subject, so if you could go in-depth on these issues in the Middle East surrounding Syria, I’d be quite interested to come back.