Crimes not associated (directly) with marijuana 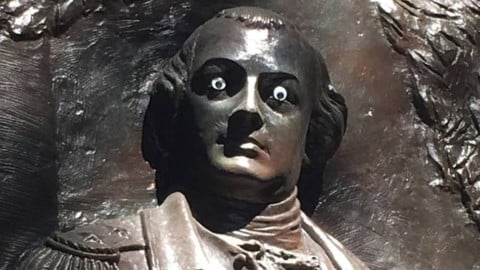 I gave the link this time to Mashable because I think they need it.

The “Googly Eye Bandit” struck a Nathaniel Green revolutionary war stature in Georgia and it has made headlines. This is objectively very funny and I don’t think that anyone should be so mad. But the government of Savannah doesn’t like fun and decided to post it on their Facebook, leading to the post getting a lot of attention. This has led to people finding a hilarious statue that could lead to someone facing felony charges.

This, in my opinion, is just like when the Hollywood sign was changed to read “Hollyweed.” No one should really care to much, as it is funny and gives temporary jobs to people who clean it up. I hate that crimes like adjusting signs and putting googly eyes on a statue get more focus than other problems in our country. I think that this goes with the Marijuana issue in that weed has harsher penalties attached to it than methamphetamine, as weed is schedule 1 and methamphetamines are schedule 2. I think that this is a major problem in our country because we focus too much on crimes that don’t matter in the slightest versus crimes that hurt people.

This goes along with the federal government burning down people’s home-grown medical marijuana plants in Gonzales vs. Raich. The government could have gone after the illegal trafficking of marijuana but no. People trying their hardest to follow state laws still get penalized by the feds, even if the crime doesn’t hurt anyone.

You did a good job very well thought out.