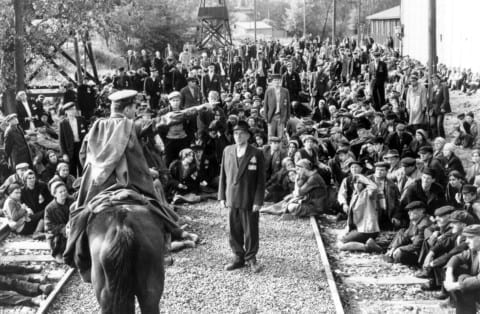 Basically during World War 1 there were lots of executions and it was basically Jews being executed. This war was one of the most devastating wars because over 6 million jews were executed like if it was nothing. But it wasn’t just jews that the germans considered “undesirables” and they are roma’s, gay people, and people with disabilities. So he had many diffrent ways to execute people and one big one was the gas chambers. he would put a bunch of people in gas chambers and killed them because they weren’t part of the so called “Master race” But eventually during the nuremburg trials all the german/nazies involved in this were going to be trialed during the nuremberg trials. But sadly Hitler was a coward and did not want to accept reality so he and his buddies eventually all ended up doing suicide. After this the ones that were left were being condemned with death and others with imprisonment. There were a few who were begging for their lives saying that they didn’t want this to happen they were only following orders. But in the end all of the people who were involved in the Holocaust were paying the price for their misdeeds.

I believe this was a huge/awful event that took place 100 years ago because over 6 million precious lives were lost because of the mentality of 1 monstrous person called “Hitler”. But I am relieved that this has ended and there have not been any mass murders nowadays. But this doesn’t mean it is ended forever there still could come a time were someone that could be worse than hitler and cause way more murderous assassinations.

Why did the Holocaust take place in the first place?