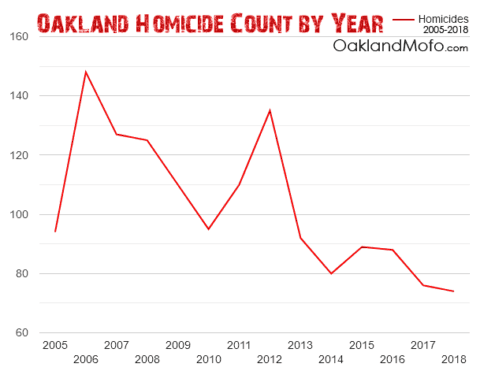 Crime rate in Oakland is 74 per one thousand residents and has one of the highest rates in America compared to all communities of all sizes (Neighborhood Scout).  Violent crime is an assault that criminals do in the middle of the streets. Some of the violent crimes include sexual assault, murder, and robbery. Gun violence is a different way than violent crime instead of physical attack they shoot because they have a weapon they can use. With these two types of crimes that are occuring it has made Oakland unsafe and cause fear for the people. Based on the research, it is clear that Oakland is a dangerous city because of it’s violence crime and gun violence which affects it’s residents.

Firstly, Oakland is dangerous because of it’s violent crime.On the website called AreaVibes about Oakland crimes it states, “In Oakland, CA your chance of becoming a victim of a violent crime is 1 in 77” (AreaVibes).The statistic is showing citizens how likely it is for a person to become a victim of violent crime in Oakland. This goes on in demonstrating us how dangerous Oakland has become and it will just keep increasing if we donCrime In Oakland’t do anything about it.I interview Yuji Okamura, a teacher of life academy and  a local resident of Oakland for the past several years. I asked one question, ‘Is the crime rate in Oakland growing up?’He said, “violent crime is decreasing and property crime is rising.”As local resident in Oakland for several years Okamura is a credible source as he has seen a lot of the changes in Oakland since moving here. He says property crime is rising because a lot of people are stealing because of rents going up and people with more money are moving here. One way to reduce the crime rates and violence in oakland is by creating stricter laws to stop people from committing those acts.

Secondly, Oakland is dangerous because of gun violence. According to the article “The Scanner: Bay Area killings rise this year but remain near historic lows” by Ashley McBride she said “…homicides have increased by about 28% so far this year. Oakland has seen 37 killings, eight more than from the same period last year” (McBride).Oakland is like a rollercoaster it has it’s ups and downs with gun violence but it has increased again. With gun violence increasing and more homicides occurring Oakland is becoming more dangerous and the chances of someone becoming a victim is higher. Jose Reyes Cruz a formal local resident that lived in the USA for a long time he shows that “Oakland has increased from various crimes” (Reyes Cruz). Crime always pops up in the news articles and social media. Because of social media it is a lot easier to find out when crimes happen and how they were done. This means Oakland now hears so much about the different crimes that happen in Oakland.

Based on the analysis, it is logical that Oakland is a minacious city because of it’s ferocity crime and gun violence which influence its dweller. As a result, Oakland is still one of the most dangerous cities in America for this year.

Dear Ronny,
Thank you for sharing your piece on crime in Oakland. As a bay area transplant I am somewhat new to the area but in the short time I have lived here one of the firsts things I was warned about was about how dangerous Oakland is. After reading your post, I now know my likelihood of being a crime victim in Oakland is 1 in 77. I thought it was great of you to inform us of the different types of crime that occur i.e. violent crimes vs, property crimes, gun violence etc. You mentioned, more awareness in the media of the crime happening in Oakland, do you think there’s anything the community can do to reduce crime rates in Oakland? Do you think awareness in the media can help in some ways?

Thanks for sharing your research about the crimes in Oakland. I have always lived in the Bay Area and knew that it was a dangerous place but your post helped me be more aware of it. The statistic that “1 in 77 people can become a victim of a crime” made it more real of the danger of living in Oakland (AreaVibes). The interviews provided also helped me understand the point of view from current residents. Especially, when Okamura said that “violent crime is decreasing and property crime is rising because of the increase in rent.” From the research you have gathered, do you or any of the interviewees have a possible solution or idea on how to reduce the crime in Oakland?

Dear Ronny,
Hi, I am a student at San Jose State University and I appreciate your research on your post. I have lived in the Bay Area for the majority of my life and have always known that Oakland was a dangerous place, but your post has allowed me to become more aware of how big of a role crime has in that area. The statistics that you used on your post was extremely powerful, like when you cited that “‘In Oakland, CA your chance of becoming a victim of a violent crime is 1 in 77” (AreaVibes).'”. While researching about homicides in Oakland, did you come across certain trends or causes to what makes homicide rates increase or decrease?
I also thought your explanation as to why property crime has been increasing was very precise and clear. Great job on your research and blog post! Thank you for informing others about this serious issue.
Sincerely,
Jiahn Kim

Ronny,
Thanks for sharing what you have learned. I agree that this is an important issue to investigate. I’m curious if you researched some of the reasons why violent crime has persisted in Oakland for so many years. And is there information about why rates sometimes go down or raise higher? I’m also curious if you have any thoughts about what might help reduce the crime rates in Oakland. Did any of the sources you read or any of the people you talked to share any possible solutions that you think would be helpful.
Best,
Erica

Dear Ronny,
I agree with your post because they should stop this at some point. Also, I agree with his “Gun violence is a different way than violent crime instead of physical attack they shoot because they have a weapon they can use” because they need a gun to kill someone and that’s how most people die and these type of situations. hank yo for writing it, you did a good job.

Dear Ronny,
I think that it is very important to assert this problem. I agree that crime in Oakland is a huge problem and when you said “property crime is rising because a lot of people are stealing because of rents going up” it reminded me about my own post. My post is about Proposition 13, which is a law that precludes the government from raising taxes by more than 2% each year. I was wondering about your perspective on this law. You say that higher prices for rent is what is causing the property crime rate to go up, so do you think that Prop. 13 is an important contributor to crime rate going down? Also, on the AreaVibes website (https://www.areavibes.com/oakland-ca/crime/), it explains that “The amount of violent crime in Oakland, CA has decreased by 11%” per 100,000 people. What do you think about this data? Do you believe that it is false? Or do you believe that a decrease of 11% year to year is not enough to show real results? This post helped me think more about the certain flaws in our city that affect the citizens both physically and mentally. Thank you for writing it, you did a great job.