Could the Electoral College Be Reformed?

Home Could the Electoral College Be Reformed? 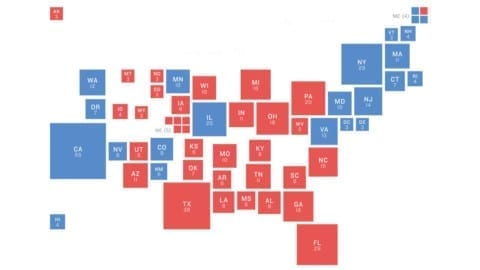 The agreement will not go into effect until the states that have joined make up 270 or more electoral votes. This way the states will vote normally until the compact would have the voting power to decide the president based on the popular vote. The compact is supported mostly by democrats but some republicans also support it most notably former RNC chair Michael Steele.

According to the American Bar, the electoral college is mandated in the constitution which makes abolishing it directly very difficult and unlikely. “The National Archives reports that over the past 200 years more than 700 proposals have been introduced in Congress to reform or eliminate the Electoral College – without any becoming law.” However there is some room to work with outside of amending the constitution. It is possible that states could change how their electors vote (this is what makes what the article above discusses possible).

The supreme court could rule who gets to decide on how electors vote. Any path to change the electoral college will be a long and difficult process but it is possible. The National Popular Vote Interstate Compact seems to be the most feasible option for reform to the electoral college currently.

It is very realistic that enough states will join the compact so that eventually the compact will have 270 electoral votes. The biggest obstacle is having the compact approved. According to Vox, “There is a real risk, in other words, that a Supreme Court dominated by Republicans would strike down the National Popular Vote Compact even if it receives congressional approval.”

Hello Oliver,
If you’re interested in learning some Electoral college reforms, check out the Election of 1876. I strongly believe that the electoral college can be reformed. I mean, how the Union went about Emancipating the slaves was highly illegal but was morally right in the end, as well as the restricting of certain rights in liberties during this pandemic such as gatherings. So in the end, the hard truth is not there is nothing truly stopping something from being changed in the American system of government. However, the bigger question isn’t could the Electoral College be reformed/ abolished, rather SHOULD it? In order to fully understand the problem, which is that the electoral college mostly stayed around in order to advance the political power of slave states. Legislation, such as the 3/5 Compromise aimed to give southern states more electoral votes. The biggest problem, well at least for me, is that it inadvertently disenfranchises voters. Take for instance California, which is overwhelmingly democrat and a blue state. If you were to vote any other way, your vote would be rendered useless under the Electoral College, as that states’ electoral votes would simply go to a democrat candidate. However, with a popular vote, your vote in a one-party state would have some value.

Hi Oliver. Seeing how our nation has become more politicized with this election and its surrounding events, knowing about how the electoral college works, and how to deal with it, is critical knowledge. In my government class, my peers have debated on the issue, mainly favoring abolition or reform, while some see it as an okay institution. Personally, and as you pointed out, reform is near impossible, so it is better to have the states themselves change, rather than the nation as a whole.

Hi Oliver. I completely agree that the electoral college should be reformed, if not eliminated. However, it is pretty unlikely that will actually happen. The National Popular Vote Interstate Compact that you mentioned is definitely interesting to hear about. It wouldn’t even need to go through Congress. However, that brings up the issue of faithless electors. Some states have laws that punish faithless electors. Do you think that this could turn away states that have these laws from the compact?