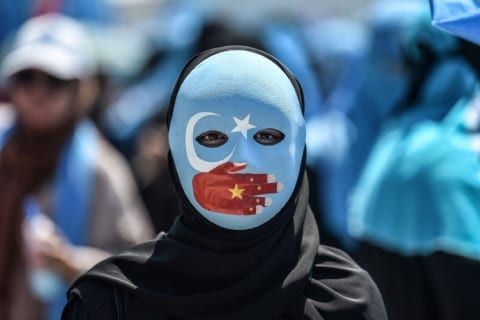 The situation going on in China is heartbreaking.

Since the ending months of 2019, the Chinese government has forced a certain group to the outskirts of its society. They have singled out the Muslim population in the whole country and put them in internment camps.

The camps have been found due to some of the victims being held escaping and gaining access to the internet and contacting someone, you can also clearly see the detention sites on satellites, and some people who see the camps say the victims are being used for forced labor.

“Beijing insists there are no human rights abuses in Xinjiang. Chinese authorities initially denied the existence of internment camps, then later described them as vocational training and re-education programs that aim to alleviate poverty and counterterrorism threats.”

Re-education? What are they planning on teaching only a specific group? That eating pork is okay? Even though it’s against their religion, or that they don’t have to wear all these clothes to hide their body except for their faces. Either way, these acts are inhuman and should not be allowed to continue.

The Chinese government is attacking the Muslim population in its country just because they don’t agree with their religious beliefs, which goes against human rights. They have even gone as far as coercive birth control along with intense abuse, what the Chinese government is doing to this certain group of people cannot be allowed to continue, they are even denying the fact that they have people in camps and attempting to “re-educate” them because they don’t do certain things that others do.

We all should come together and speak out against China’s acts as it’s inhumane and should never happen again especially after history has taught us the events that can happen when such things are allowed to continue. Although we may not be of the same religion I still see them as another person and just because they have certain beliefs they shouldn’t be treated that way, I pray that what is happening down there may come to a stop soon, and hopefully the world can wake up soon and realize what is going on.

Image: TOPSHOT – A demonstrator wearing a mask painted with the colours of the flag of East Turkestan and a hand bearing the colours of the Chinese flag attends a protest of supporters of the mostly Muslim Uighur minority and Turkish nationalists to denounce China’s treatment of ethnic Uighur Muslims during a deadly riot in July 2009 in Urumqi, in front of the Chinese consulate in Istanbul, on July 5, 2018. Nearly 200 people died during a series of violent riots that broke out on July 5, 2009 over several days in Urumqi, the capital city of the Xinjiang Uyghur Autonomous Region, in northwestern China, between Uyghurs and Han people. / AFP PHOTO / OZAN KOSEOZAN KOSE/AFP/Getty Images

Hi Emmanuel,
I’m in shock of what has been occurring in China to the muslim community. For what has been stated it sounds like another holocaust just against the muslim people. As heartbreaking as this is, I don’t understand how this is not getting enough media coverage, this is an important issue that we all must acknowledge!

I appreciate that you shed light on the despicable act by the CCP in this post. The Chinese government has certainly violated human rights and needs to be confronted and held accountable. One thing you said that stood out to me is “Although we may not be of the same religion I still see them as another person and just because they have certain beliefs they shouldn’t be treated that way.” This shows that even you don’t necessarily share the same religious beliefs, you still have compassion and care for those who are brutally oppressed and silenced. Others should follow your example and realize that differences are inherent and often good. The minority should not be punished for simply being the minority. Rather, they should be allowed to leave in peace and under their own direction. The CCP must stop its oppression of dissenters and open the country to a more democratic system. Thank you for your post; it was very informative and championed a great message. I look forward to reading more posts from you in the future! Thank you.

Dear Emmanuel:
I am Agreeing with your post, “Conflict in China,” because there were things that i heard that should not be happening. Some of the things im reading is just inhumane.
One sentence you wrote that stands out for me is: “ they are even denying the fact that they have people in camps and attempting to “re-educate” them because they don’t do certain things that others do.” I think this is disgusting because people should be able to do what they want and they should be able to follow their religion without any people trying to change them.
Another sentence that I saw was: “Chinese government is attacking the Muslim population in its country just because they don’t agree with their religious beliefs, which goes against human rights” This stood out for me because again i also thought that this was inhumane and the muslim population that lives in china should not be going through this just because the chinese government doesnt agree with the muslim religion.
I do agree with you that we should try to stop this issue. One reason I say this is taht people have gone through this before and we know what happened so i thibk that we shouldnt repeat history. Another reason I agree with you is that this is inhumane and should not be allowed to continue and no one should ever experience something like this

Thanks for your writing. I look forward to seeing what you write next, because you just brought up a situation that i dont even know about.