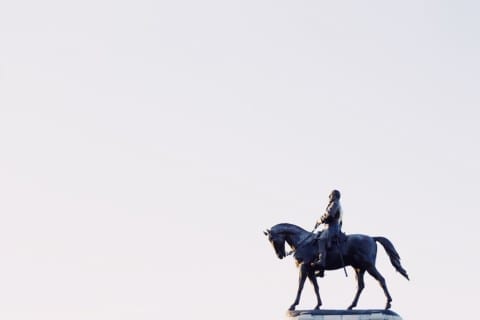 The removal of Confederate monuments from our cities and gathering spots is necessary for our country to move forward into a new era, ditching a history of pain, anger, and hatred from the present and putting it right where it belongs. These monuments of the Civil War, no matter what their intended purpose may be, have become havens for the far-right, subjugation of minority groups, and false narratives of the truth of the Civil War. These monuments also tend to be the ground zero of many large, terrible protests and riots, such as the “At Ready” monument in Charlottesville, which hosted the “Unite the Right” rally, which became legal. While it is good to hold protest, and it is legal under our Constitution, the ultimate choice to remove said monuments is up to the local municipalities who own the area.

Going back to the “At Ready” statue of Charlottesville, Virginia, despite the protests against its removal several years ago, it was still elected (and paid for) by the city to me safely removed and transported to the Shenandoah Valley Battlefield Foundation, a group which specializes in history. These institutions are where these monuments belong. Public grounds and parks are inappropriate to hold them due to their connotations and connections to the hatred and disgust our nation has faced, and continues facing through many forms of racism and bigotry. Personally, however, I can feel lenient to certain memorials towards the South, at least based on intention. From my understanding of the monument production of Confederate memorials in the south, there were two main groups that we still see today. The statues and memorials both paid and made by Confederate veterans soon after the war’s close. These tend to depict major generals, such as Robert E. Lee, and the intention was for memorial of the dead and fallen, or of the Triumphs of the generals. The other group consists of those made in later reconstruction, and in the 1920s, when the Ku Klux Klan was at its strongest. These monuments were paid for by foundations such as the Daughters of the Confederacy or other private means. These groups used the monuments as another front to push the absolute lies and treachery of “The Lost Cause,” a romanticization of the Confederacy during the Civil War. These monuments were also used as scare tactics against the segregated blacks of their communities, to keep them from power or voting. No matter which “group” they may belong to, nor their intention, modern times have twisted, corrupted, or continued these messages of hatred, and they must be stopped.

I found this post to be extremely intriguing. As a black woman in America, I already feel that my skin color remains a confining factor, the confederate monuments are just a reminder to black Americans that our existence was equivalent to property rather than humanity. I liked your opening statement where you stated “The removal of Confederate monuments from our cities and gathering spots is necessary for our country to move forward into a new era, ditching a history of pain, anger, and hatred….” I also agree that if America intends to progress, the removal of Confederate statues is a positive direction.
How do you believe the rise of BLM, ALM, and Blue Lives Matter has affected Americans’ attitudes toward Confederate statues?

Although I’m not completely sure, and it would require a tremendous amount of research, I don’t think the losers of any war throughout history were allowed to build statues of their leaders after the fact. Obviously, things are a little different in America, because we have certain constitutional rights that can’t be violated. This has enabled the hate and racism many still have to deal with today. I have to say Milo, I couldn’t agree more with what you had to say here. No matter what these statues stand for in the eyes of the people who are keeping them up, they stand for slavery and hatred to others, fellow Americans in fact. And this is just my opinion, but I don’t think anyone should want to be reminded of Southern heritage and history, because it’s a racist history and something that still disgraces this country that was formed in such a way that everyone is created equally. Thanks for writing this, I enjoyed it.

I agree with you. Confederate monuments were not made to remember the dishonorable and racist actions of the CSA and it’s leaders but rather to celebrate and honor them. Confederate Monuments do not teach about the past — they glorify a racist cause. Monuments to traitors certainly do not belong on federal or public lands. I recently read a fascinating article in the New York Times about the logistical difficulties faced in the relocation of monuments. It truly is a fascinating issue.
Link to the NYTimes article: https://www.nytimes.com/2020/10/08/arts/design/jefferson-davis-monument.html?action=click&module=Top%20Stories&pgtype=Homepage

Dear Milo, I thought this was a well thought and constructed essay on the current state of confederate memorials in America today, which are very prominent in the south. I strongly agree with the point you made about no matter the intention of the creators of these statues, they have taken a new meaning as a symbol of hatred and white supremacy among alt right groups. In order for this country to move forward, I think we need to address these statues and rectify the horrible past they represent. Here is an article I found interesting https://www.npr.org/2020/10/06/919193176/confederate-statues-come-down-around-u-s-but-not-everywhere

In this era of social change and social healing, I couldn’t agree more; Confederate monuments are antiquated symbols of hatred and oppression that need to go. I’m glad to see someone addressing the “heritage not hate” argument, and sending it to the depths where it belongs.

I am happy with your post, “Confederate Monuments of America”, because I agree with you that the only we can move forward as a country is by removing the confederate monuments from our cities and leaving it where it belongs.

One sentence you wrote that stands out for me is: “These monuments of the Civil War, no matter what their intended purpose may be, have become havens for the far-right, subjugation of minority groups, and false narratives of the truth of the Civil War. ” I think this is correct because these monuments don’t allow people to move from the events of the past, and that is bad for our country as a whole.

Another sentence that I liked was, “Public grounds and parks are inappropriate to hold them due to their connotations and connections to the hatred and disgust our nation has faced, and continues facing through many forms of racism and bigotry.” This stood out for me because those monuments have connections too our past tragedies that we still continue to face today.

I do agree with you because I also think that the monuments should be taken down. One reason I say this is because they are disrespectful to the minority groups of this country because of what they are representing. Another reason I agree with you is because monuments like this don’t allow our country to progress.

Have you seen this article, https://www.cnn.com/2020/06/09/us/confederate-statues-removed-george-floyd-trnd/index.html. I thought you might be interested in this because it talks about how they are removing the monuments after the death of George Floyd.

Thanks for your writing. I look forward to seeing what you write next, because… I like your ideas and what you are talking about in this post. Keep making posts about the problems facing our country and I will keep checking in because I like what you are saying and you have good opinions Also because I liked your take on the confederate monuments in America.