College Campuses Should be a Safe Place for Women

Home College Campuses Should be a Safe Place for Women 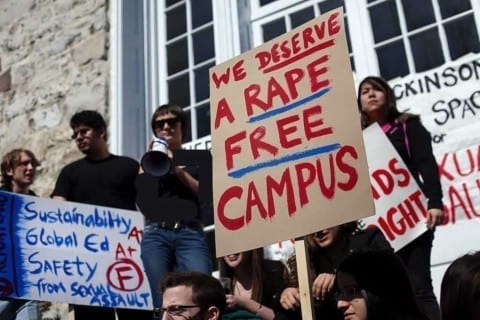 Sexual assault is a major issue in the United States and as the next President, I implore you to address it. Sexual assault happens much to frequently but possibly one of the most troubling aspects of this issue is the amount of sexual assaults happening on college campuses and the abysmal rate at which rapists are being convicted.

A new survey by the Association of American Universities has shown that 23% of female college students have experienced some form of unwanted sexual contact (Wallace). These acts were carried out by force or while these women were incapacitated because of drugs or alcohol. Not only were these women sexually assaulted, but over 50% them were too scared to come forward because they felt embarrassed, ashamed, and thought that nothing would be done about it. According to the survey, some of them believed that their unwanted sexual encounter was not “serious enough” to be reported. Victims themselves are saying they are not worthy of justice, bringing into the light the utterly too real issue of sexual assaults on campuses and the victim blaming mentality which keeps women from reporting these crimes and seeking help.

Even when sexual assaults are reported, rapists often don’t face justice. Only fewer than 15% of rapists get convicted and many of them receive shortened sentences. This topic has recently received attention in the media due to the Brock Turner case. Turner, 21, was caught raping an unconscious 22-year-old woman behind a dumpster on January 18, 2015 at Stanford University. For this act he received a minuscule sentence of six months, but only served three months in jail due to “good behavior”. The reasoning behind this sentence was the Judge believed longer sentence would have “ a severe impact” and “adverse collateral consequences” on Turner. It is sickening to see that the justice system cares more about the well-being of the rapist than the victim, thereby influencing a mentality that shames the women who are raped yet accepts and supports that actions of the rapists, passing off their actions as “mistakes” or a “lapse in judgment”.

College should be a fun time for exploring and learning, not a time when women should be concerned and scared for their safety. The fact that approximately one in five female college students have experienced some type of sexual assault is troubling and frightening. Much more work needs to be put into protecting victims, increased education on the severity of sexual assault and the lasting damages caused. Something has to be done so rapists are treated as harshly under the law as they deserve for their crimes. Sexual assault is much too big an issue to keep ignoring so please Mr./Mrs. President, do something about it.

Carmen, I had no idea that 23% of the female college students have experienced an unwanted sexual encounter, but I totally agree with you that this issue shouldn’t be ignored. I appreciate how you provided evidence and examples to make this post really persuasive and emotional.

Carmen,
thank you so much for bringing this issue to light. I love that you addressed the miniscule punishment rapists receive, and how that in turn urges people who have been raped not to step forward and report. I also love that you mentioned the frequency with which it happens on our college campuses, spaces that are supposed to be safe, so learning can be productive.

Dear Carmen,
I too wrote about sexual assault and rape. It is truly blasphemous that rape culture is still going today, and is seen as something that women need to work on. The justice system does indeed to to work on fair and equal punishment, and bring to light the true severity of rape. You did an amazing job citing your work and having your essay flow. Nice work.

This post was great. You used great examples and it was very detailed. As a student who will soon be in college, I really was affected by this. Great post.

I think this was really well written, you provided good evidence and used good examples. It’s something that anyone can connect with, and makes people feel connected to the issue.

I am very interested by your post “College Campuses Should be a Safe Place for Women”, because I know that lately Sexual assault is a major issue in the united states.

One sentence you wrote that stands out for me is: new survey by the Association of American Universities has shown that 23% of female college students have experienced some form of unwanted sexual contact (Wallace). I think this is very disturbing because I feel like college should be of the places where women should feel at home not walking knowing that they might assaulted.

Another sentence that I was interest about is “Not only were these women sexually assaulted, but over 50% them were too scared to come forward because they felt embarrassed, ashamed, and thought that nothing would be done about it. According to the survey, some of them believed that their unwanted sexual encounter was not “serious enough” to be reported”. This stood out for me because I feel like this issue is not taken seriously that is why most victims do not come forward because they fear that they might be put down and they would be shamed.

I agree with you because I feel like this issue is getting no attention and should be taken care of seriously.
Thanks for your writing. I look forward to seeing what you write next, because college should be a place where everyone feels safe.

I enjoy this article because I agree that college campuses should be safer for women because colleges are supposed to be safe places for education, and it’s upsetting that the young women with a determination to be something are forced to worry about their safety. And past that, they’re forced to worry about their justice as well because of the low rapist conviction rate. I also agree with you’re statement that the rapists are treated better than the victims, which is appalling.

As a girl who is a junior in high school, this article strikes me. I will soon be preparing to move away from home and into college where my parents can no longer protect me anymore. In this day and age women are not treated right and we shouldn’t have to walk around feeling scared all the time. No one seems to want to stand up or talk about rape because it can be embarrassing, but more people need to stand up to it and bring more attention to it. I have read countless articles where even when the rape victims come forward, their attackers usually don’t have to face any consequences. When a woman is attacked, her dignity is taken away, and it isn’t fair that her attacker can walk around just the same as before without being punished. This was a great article.

Dear carmen
I am surprised by your topic, “College Campuses Should be a Safe Place for Women
,” because you didn’t talk about men being safe on college campuses. I like the idea i just thought about men and women when i read your title.
One sentence you wrote that stands out for me is: “Even when sexual assaults are reported, rapists often don’t face justice. Only fewer than 15% of rapists get convicted and many of them receive shortened sentences. ” I think this is scary because i have sisters and i wouldn’t want anything like this to happen to them and if it did to know that there rapists probably wouldn’t get convinced is crazy to me and it would drive me crazy.
Another sentence that I went through the article “Turner, 21, was caught raping an unconscious 22-year-old woman behind a dumpster on January 18, 2015 at Stanford University.” This stood out for me because Stanford is one of the schools i grew up hearing about and to hear something like this makes me thing is it really a good school.
Your image reminds me of something that happened to me of watching law and order and watching all the girls get rapped and messed with. I wouldn’t want my little sister to be in this sitions at all.
Thanks for your writing. I look forward to seeing what you write next, because i would love to hear more about college campuses and which ones are safe.

I loved this article because rape has unfortunately become a huge part of our society. I feel like I see it happening more and more everyday and nobody seems to be taking action. This is a huge topic that the next president needs to address and make a change. I loved that you used the Broke Turner example because that’s just one of the many cases where the victim has walked away feeling as though she was in the wrong and the rapist walked away barely affected. Great article!