Close Reading of Desdemona in Othello 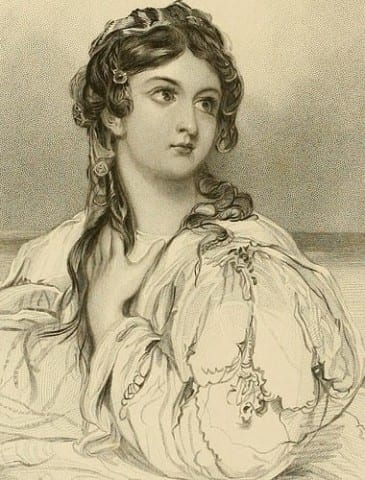 When the king finds out that her daughter has married the moor, he is angry with him and thinks he has taken advantage of her. So he takes Othello to the authorities, where Othello is questioned. Time and time again Othello says Desdemona loves him back, but the father refuses to listen to her. So Othello defends himself by asking for Desdemona to confirm their love for one another. She does this by telling her father this.

I perceive a divided duty here.

I am bound to you for life and education;

My life and education teaches me

How to respect you as the lord of duty.

I am your daughter: but he is my husband,

As the duty my mother showed

To you, over her father.

I may profess a challenge

I have a duty to the Moor, my lord.

In this dialogue Desdemona is confirming her duty to being married to Othello to her father the king. She starts off by saying he is the reason her life and education has taught her how to respect him as a person, when she says, “How to respect you; you are the lord of duty,”(1:3:2012). She compares her duty to the moor to, “duty as [her] mother show’d”(1:3:2014). She says just like her mom showed love to him over her own father, she must show Othello her love over him. By using compare and contrast Desdemona is convincing her father to trust her in her choice of love. Another way Desdemona’s dialogue could be translated is her telling her father she is challenging herself to love Othello, despite what she has learned through the life and education her father gave her. She says, “I challenge that I may profess, due to the Moor”(1:3:216-217), basically saying she is professing her duty to Othello even though it challenges her life and education.

Desdemona is confronted by Othello, who claims she was a “whore” and was cheating on him. After this claim she is freaking out and goes to Iago for comfort. She doesn’t know how Othello thinks that, and knows in her heart that she loves him.

What shall I do to win my lord again?

Good friend, go to him; for, by this light of heaven,

I know not how I lost him. Here I kneel:

If e’er my will did trespass ‘gainst his love,

Either in discourse of thought or actual deed,

Or that mine eyes, mine ears, or any sense,

Delighted them in any other form;

Or that I do not yet, and ever did.

And ever will–though he do shake me off

To beggarly divorcement–love him dearly,

How do I win over my lord?

By the light of heaven, go find him,

I don’t know how I lost him.

If my will trespassed against his love,

In my thoughts or my actions

Or in any other way.

I did not ever do that yet,

He shakes me off.

Beggerly divorce, I love him,

In this dialogue Desdemona is seeking advice from Iago. She asks how she “wins him back”. She says, “What shall I do to win my lord again?”(4:2:176), using word choice in the following lines, she implies that she lost him because she asks Iago to go find him. She feels like she has lost Othello, just like Othello has lost his own mind. Remind you, in the beginning of the play, Othello was the one proving his love, now she is. She tells Iago that she never betrayed Othello’s love, “in discourse of thought or actual deed”(4:2:180) – which Iago knows – and is confused still as to how she is loyal yet, “he do shake [her] off,”(4:2:184). This dialogue is very ironic, like many of Shakespeare’s plays, because Iago was the one who started this whole mess, yet Desdemona is the one begging him for help.