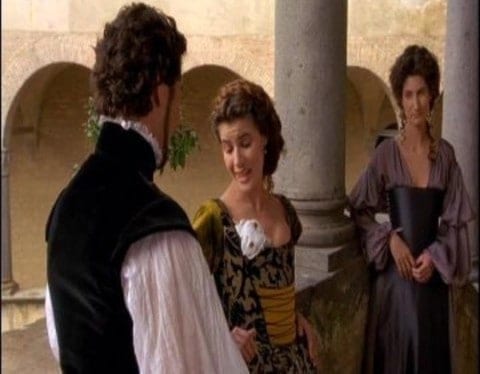 Quote: [Desdemona] “If I do vow a friendship, I’ll perform it to the last article. My lord shall never rest; I’ll watch him tame and talk him out of patience; His bed shall seem a school, his board a shrift; I’ll intermingle everything he does with Cassio’s suit. Therefore be merry, Cassio, for thy solicitor shall rather die than give thy cause away” (line 23-30).

Analysis: At this moment, Cassio has started a conversation to Desdemona asking if she can help him talk to Othello about his position as a lieutenant. This quote reflects Desdemona and Cassio’s relationship as friends, and nothing more. As she talks to Cassio, she demonstrates how she plans to talk to Othello by being persistent. The word “intermingle” is important because she will talk about Cassio’s position to Othello many times to get his title back, but this may be a problem that will help out Iago because he has planted the idea of Desdemona and Cassio betraying Othello. This word also reflects what Desdemona is trying to do, she wants to bring Cassio and Othello back together (mingle) in order to fix their friendship (inter). Although this may appear to Othello that Desdemona is having an affair with Cassio, the reality of it are Desdemona’s true intentions- which are to give Cassio his position back and improve their friendship. This will greatly, negatively influence Othello’s thoughts about his wife cheating because he doesn’t know the real reason as to why Desdemona will mention Cassio a lot. This will just add more “fuel” to the “fire” because Desdemona is unaware of Othello’s anger and thoughts he has towards her, and she will further infuriate him by talking about Cassio and “prove” to Othello that the lies Iago tells him are “true”. Desdemona also identifies herself as a “solicitor”, today this word means someone who tries to obtain business orders, advertising, etc or the chief law officers of a city. But, according to the Etymology dictionary, “solicit” ( from 15C) meant to disturb, rouse, trouble, or provoke. The word evolved in mid-15C to “manage affairs”, specifically in a sexual sense. This is a double entendre because Desdemona interprets the friendship she has with Cassio as a business (friendship). But, Othello interprets it as cheating (sexual sense), something that would be typical because a man is more capable of thinking negative about their partner and being more influenced by his friends.

Quote: [Othello] She’s gone. I am abused, and my relief must be to loathe her. O curse of marriage, that we can call these delicate creatures ours, and not their appetites! I had rather be toad, and live upon the vapor of the dungeon, than keep a corner in the thing I love for others’ uses” (lines 297-303).

Analysis: In other words, Othello is already thinking that Desdemona really did have an affair with him with Cassio, and in order to be reassured, he will have to “loathe her” which according to Etymology dictionary it means to be evil, or hateful. This foreshadows what will happen later on in the play because Othello plans to hurt Desdemona in a cruel way in order to feel relieved of the pain “she caused”. Othello also makes a remark back to his marriage that he cannot control Desdemona physically. He says, “that we can call these creates ours, and not their appetites”,  which means that although, Desdemona is his wife, he has no control over her emotions and actions. When Othello mentioned the word “appetite” he was referring to his libido. Also, the appetite that Othello mentions means the desire to satisfy a bodily need, which may further symbolize body and mind. Othello says that that is what he wants from Desdemona, her devotion to him, and nobody else. This quote can connect back to the feminists lens, where we can see that women are portrayed as “delicate creatures”. Shakespeare intentionally chose to characterize women as “delicate” because he wants the reader to notice how women are seen weak compared to men (Othello, which is Desdemona’s lord). He also chose to characterize women as “creatures”  because back in the day, women were mostly controlled by men. Today, “creature” is defined as a person who is considered to be completely under the complete control of another person (Desdemona is under the control of her husband Othello).  Othello also mentions that he prefers to be a “toad”, or someone who is a detestable person than to have only a part of somebody they love, sharing the rest of theirs with someone else. This means that he wants loyalty, he doesn’t want Desdemona sharing herself with other men- Cassio.