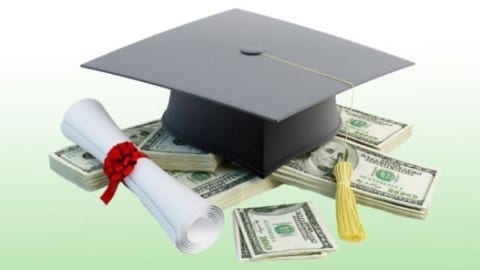 High school students are stressed enough about actually getting accepted into a college, so the price of college shouldn’t be on their minds as well. Choosing colleges shouldn’t be about how much a person can afford. One shouldn’t have to limit their education simply because of money. After working hard for four years in high school, we normally have another four more years of schooling followed by a lifetime of paying off student loans to look forward to. Recently, a college degree has become necessary to get a decent paying job. It’s practically impossible to make a living wage without a BA-requiring job, so a degree is a necessity. College is right around the corner, and the system needs to change.

A while ago, if someone got a low paying job and went to college, they would have been able to pay for it just fine or have a very small amount of loans. But the cost of college is rising faster than inflation. The graph below shows the average amount of debt accumulated with each graduating class over a 21 year span (Izzo). One can clearly see that the amount of student debt is about to surpass inflation, which is making it very hard for students to pay off their growing amount of debt. In 1931, one would pay an average of $19,000 in today’s money for a full year (Rothman). But today the average cost for college is roughly $24,000 (“What’s the Price Tag”).  Even though it’s only a couple thousand dollar increase, it’s important to keep in mind that college wasn’t required in 1931, it was only for the elite. 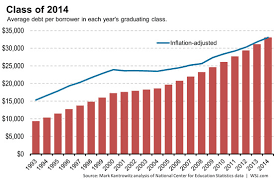 Colleges are aware of the money problems students are having, and most colleges offer several different types of scholarships. In the 2007-2008 school year, the average amount an undergrad received in scholarships was $2,523.31 (Kantrowitz). However, the average cost for tuition then was $11,049 (Tuition), which means students were still paying roughly $8,500. Most people don’t have $8,500 lying around, so student loans would have to be taken out, with interest. The current interest rate on undergraduate degrees is 3.67% for every year that someone doesn’t pay it off. And most students are normally at school for four years (“Interest Rates and Fees.”). If someone were able to pay everything off after one year, it would equal $46,500. It’s also important to note that not everyone gets a high-paying job right after college, so it isn’t realistic to pay off all student loans after one year. People are drowning in student debt and there are several ways to fix it.

One solution would be to make taxes cover college tuition, or at least more of it. And that doesn’t necessarily mean taxes have to be raised drastically. There are several different areas that receive too much money from taxes, for example the military. Another way to get the money would be to make taxes increase with the income, so the richer one is, the more taxes they pay. This way, we would have a larger sum of money to support college students. There are different ways to correct the errors with college tuitions, but someone of power needs to actually do something.

I loved reading your piece. As a senior I totally understand what you guys are going through and agree that college costs should be reduced. I think that even colleges in general could reduce the costs of admission instead of having everyone pay more taxes. We all already pay enough taxes and I know that hard-working adults hate to see the money they have earned taken away. I do not agree that we should tax the rich more because some of those people worked extremely hard to be where they are today. So why should they be punished for all that hard work? Yes there are some rich people who did nothing to receive their status, but there isn’t a way we can filter out those people. Overall, if colleges are giving out so many scholarships why can’t they just lower their price to begin with?

Dear Jordan and Kait,
I was amazed by your post, “Climbing College Costs.” Education should not be a privilege, it should be a right, and these drastically increasing prices are inhibiting this. I wonder what percentage of American high school graduates actually do attend college. I am aware that a large number don’t, and that is something we must fix; one’s education can have a significant impact on one’s life. Learning can allow us to change the world for the better, and become something we couldn’t have otherwise.
“The current interest rate on undergraduate degrees is 3.67% for every year that someone doesn’t pay it off” captivated my attention and astonished me. I hadn’t realized that interest rates were so high! Over 4 years, the interest rate of student loans owed to a relatively cheap college will have accumulated to over $1000! That’s preposterous!
Another sentence that I was intrigued by was, “Even though it’s only a couple thousand dollar increase, it’s important to keep in mind that college wasn’t required in 1931, it was only for the elite.” From 1931 our education system has evolved significantly; knowing that over the years our education system has improved somewhat gives me hope!
Yet, for it to keep improving, we must make the effort! I agree with you and believe alternatives could be found!
I look forward to reading more of your posts and learning about more social issues affecting today’s society!

Jordan, I thought your piece was very well put together and your arguments were backed up with solid evidence. I agree that choice of college shouldn’t be determined by socioeconomic status. I like that you offered solutions to the crisis– this makes fixing it a justifiable and not all impossible endeavor.