Climate change will destroy with Earth no government action

Home Climate change will destroy with Earth no government action 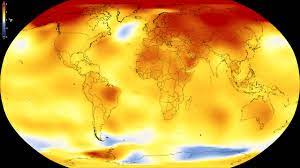 World leaders, until recently, have shuffled their feet in taking action to try to halt greenhouse gas emissions causing rapidly rising temperatures. Several projections from the IPCC show that the Earth will warm 1.5 degrees Celsius between the year 2030 and 2050. This increased level in warming has grave consequences for many countries around the world. Several island countries face an existential crisis in the face of rising sea levels, while others see more frequent and intense natural disasters that threaten crops, water supply, livestock, etc. such as droughts, thunderstorms, blizzards, and wildfires. As of 2020, 1% of the world is designated as barely livable hot zone; this regions are, for the most part, located in sub-Saharan Africa and the Middle East. By 2070, that figure could soar to 19%, with many new countries and continents affected. The affects of rising temperatures are event in my home Salt Lake City. Last winter season, the city finished a snow accumulation total of 28 inches; half of which came from a snowstorm that slammed the city on February 16 – 17. The snowstorm broke a new record dumping the most snow the city has ever seen in the month of February. However, the rest of the snowfall for the season was abysmal and that has grave consequences for the city’s water supply. It also affected our recreational winter sports as well as the amount of water left in the Great Salt Lake, which currently sits at a record low. So, climate change is not a hoax and that’s been made clear. The question is what do we do and where do we go from here? We must hold our government accountable and pressure them to do more. Otherwise we will never solve this crisis.

Hey Walter!
I really enjoyed reading your post since it is a huge issue right now. It’s weird how we have been talking about it for so long now and only now started to try and change. I agree when you said that we have to hold the government accountable to do more. Thanks for writing this and I cant wait for your next post!

Facts Walter. Climate change is a very serious problem but no one has even really been talking about it until recently.