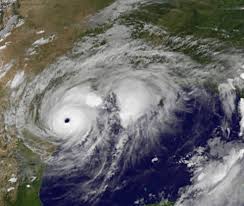 Over the last decade or so, America and many other countries in the Atlantic have been ravaged by monster hurricanes. These storms have caused billions of dollars of damage and have displaced millions of people. Scientists are beginning to question whether or not these hurricanes are a natural phenomenon or if these storms are another negative affect of global warming. In an article by Jerry Kluger, “Global Warming: The Culprit? Evidence Mounts That Human Activity is Helping Fuel These Monster Hurricanes” he says that the amount of category 4 and 5 storms has increase significantly and the amount of category 1 and 2 storms have decreased. In annotations, Scientists say that climate change can be said to intensify the power of a hurricane, but there is no evidence pointing to climate change increasing the number of hurricanes. While many believe that climate change has nothing to do with hurricanes, climate change is providing the prime conditions for hurricanes to gain intensity and power.

In his article, Kluger says that “It is believed that warmer sea-surface temperatures cause the increase in hurricane intensity.” The intensifying cycle begins with heat provided by the sun. The sea and the atmosphere begin to warm and absorbs this heat energy from the sun. This moisture makes it’s way into the upper atmosphere and condenses as it comes into contact with the cooler temperatures. Global warming has intensified this process by heating the surface temperatures of the ocean and providing more fuel for these hurricanes. If you think about it, global warming provides prime conditions for these hurricanes to pick up strength and intensity. Hurricanes run off of warm water and condensation that they pick up from ocean surfaces and eventually dump this water out. Our oceans are warming at alarming rates due to climate change. This warming pattern provides more warm water for hurricanes to run on.

Many people say that climate change has very little effect on the intensity of storms in the Atlantic. Some scientists say that Hurricane Katrina gained intensity over a patch of deep warm water in the Gulf of Mexico, which was not representative of an overall change in temperature of the sea. In Kluger’s article he says that “this is supported by saying that global warming only impacts the surface waters, something that hurricanes likely displace. If only the surface is warm, hurricanes would decrease in intensity by coming in contact with cool deeper waters. These scientists suggest Katrina found deeper warm water by chance.”

Despite these claims, there is enough evidence to say that global warming is having a major impact on the intensity of hurricanes. 2005 was the first year that we could actually rank hurricanes with the alphabet because we had so many category 4 and 5 hurricanes. In 2017 alone, three category four hurricanes made landfall in the USA. This can’t just be a coincidence. We must use our technology to better predict the causes and effects these hurricanes may have and take major precautions in protecting against the monster storms, considering that they are one of the most common natural disasters in America.

Sofia,
This is a really well written article that addresses a very important problem within our society. We need to find a way to improve the environment that we all live in. The negative affects that climate change has on our society needs to be shown to everyone in order to make a difference. I think that this is a great article that shows people that we need to make a change in our lifestyles. We need to stop talking about change and actually do something about it.

Sofia I have also realized that this last year especially has had an extreme increase in particularly hostile hurricanes. As a child I remember a few major hurricanes such as Katrina or others but in just these last several years it seems they have been coming one after another with thousands of deaths in each. Although it seems there isn’t really hard facts of how global warming is pointing to these hurricanes, I feel like many recent events can be attributed to global warming. At this point I feel like we are placing blame of everything on global warming and it many not be leading to all of these issues. Keep working this will be a very good essay.
https://www.gfdl.noaa.gov/global-warming-and-hurricanes/

Hi Sofia!
In my oceanography class, we talked a lot about this issue in wake of the terrible hurricanes, Harvey, Irma, and Maria. These storms and their extreme damage was unprecedented and absolutely tragic. There is a clear correlation between warmer water (warming occurring from climate change) and hurricanes: warmer water = more fuel for the storm = much higher intensity and frequency, creating the perfect conditions for hurricanes to thrive in. Although I hope this year in hurricanes was an outlier, next year’s season will reveal if these major storms will become a destructive pattern. Check out this article going more into depth on the connection of hurricanes and climate change: http://www.climatecentral.org/gallery/graphics/hurricanes-and-climate-change-what-we-know

I look forward to hearing more from you on this important topic.

Sofia, your article is very interesting. It’s very important we identify what role the human race plays in disasters across the world. Our climate is changing faster than it ever has before and global warming is affecting us more than we know. I believe it’s time to make a change. We need to start recognizing the things we can do to help our world thrive. Although it’s hard to predict what mother nature has coming, it’s still important we change our habits and help our environment. I found this article on global warming and what we can do to help. (https://www.cooleffect.org/content/globalwarming?gclid=EAIaIQobChMI-Nee1rSo2QIVDY1pCh2qHQ9SEAAYASAAEgJOgvD_BwE) Keep writing!!