Climate Change and the Impact on Wildfires

Home Climate Change and the Impact on Wildfires 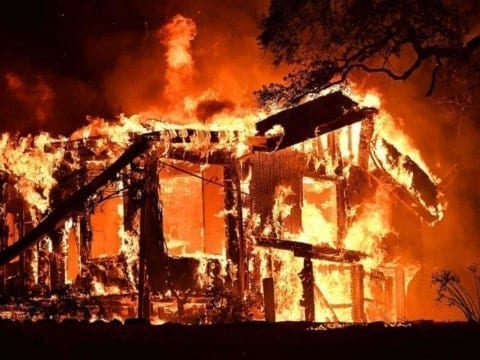 California broke many record this past year, records that weren’t meant to be broken. This past year California had the most wildfires it has had on record and the most destructive they have ever been. With the growth in number of wildfires and severity it makes you question why this is happening and what we can do to fix this problem. “For the first time, climate researchers are reporting that some weather events would have been outright impossible without the warming influence of humanity’s greenhouse-gas emissions.” With the new research that scientist have done we can see the data and pinpoint a problem. The problem that they have found is “Greenhouse-gas emissions, chiefly those from fossil-fuel use, are a prerequisite for this kind of heat.”

As we gain knowledge of climate change and the effects it has on the growing number of wildfires. Human beings as a race need to help make the earth a cleaner environment so that we don’t have to deal with increasing natural disasters. While reading articles on the effects that climate change has on wildfires I found that greenhouse gases along with creating cities and houses next to places a fire could easily be started. Though wildfires can often be cause by the rise of greenhouse gases they have also found that people and their actions cause a lot of fires. “A study published earlier this year in the Proceedings of the National Academies of Science, or PNAS, found that 84 percent of wildfires are ignited by humans, whether through downed power lines, careless campfires, or arson.” A way to avoid this could be by better city planning and making people aware of the possibility of them starting a wildfire. California “[has] some of the fastest-growing property values and highest-priced homes in the United States.” This could be a reason for why they keep building even when these houses and building are at risk of being in the path of a wildfire.

Ways we could help out the environment stop getting so many wildfires could be better city planning and change how we build homes in areas prone to wildfires. Though overpopulation and bad city planning cause a lot of wildfires we also know that greenhouse gases are to blame for the overall increase temperature we are experiencing that make wildfires able to form. “The solution has been clear for more than two decades: governments need to take aggressive action to curb greenhouse-gas emissions. By attributing real-world impacts to global warming, scientists are providing citizens and political leaders with further evidence that climate change is a clear and present danger, not a distant threat to future generations.” We need to study how we can limit our greenhouse gas emissions and also city planning. People also need to be informed and how to be safe while using anything that could possibly start a fire which could impact the lives of many.

Parker, you cited your sources very nicely! I agree 100% with everything you said. One thing that makes it difficult when it comes to targeting the issue of climate change is that people don’t believe in it, or more specifically, the people in charge of our country. It is obvious to those who “believe” in climate change that had a very devastating impact on the California landscape. Not only is it becoming a danger to our environment, it is damaging the livelihood of people and animals as well. With the rising of green house gas emissions, the keystone species that each animal kingdom depends on are suffering, which ultimately has a cascading effect on those who follow. Who knows where this world will be in 50 years if we continue to ignore this issue? Check out this article: http://ic.galegroup.com/ic/scic/ReferenceDetailsPage/ReferenceDetailsWindow?disableHighlighting=false&displayGroupName=Reference&currPage=&scanId=&query=&docIndex=&source=&prodId=SCIC&search_within_results=&p=SCIC&mode=view&catId=&u=pioneer&limiter=&display-query=&displayGroups=&contentModules=&action=e&sortBy=&documentId=GALE%7CIIAIHP015772693&windowstate=normal&activityType=BasicSearch&failOverType=&commentary=