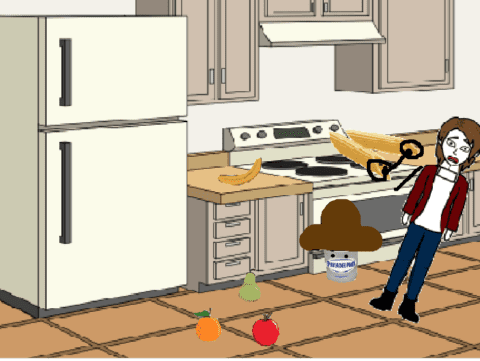 My scratch animation is a humorous story on how two food spy agents try to save their fellow food agents that are being held captive by The Human Chef who tries to eat all of these agents. To get to this final production, I went through a series of steps: creating the concept, writing the script and creating the storyboards to get to the final animation. I took the longest on just thinking of an idea because I wanted it to be something that can be funny. The storyboards helped with determining te positioning of the characters.
In my animation, the protagonist, Agent Bagel (the character is literally a bagel) is assigned by his head, Agent Ice-Cream (the character is literally an ice- cream) to go on a mission to save his fellow food agents. Agent Bagel wears a disguise, a pasta costume while Cream-Cheese (the character is literally a Cream- cheese), Bagel’s sidekick just tags along. They make a long journey to reach the Human’s Chef’s place…

… where they have been caught escaping the other foods from. The Human Chef gets beat up by the foods badly. He later apologies and the agents accept his mistake. But out of the blue, he goes back on his word and eat them all up alive. Sadly, the Human Chef wins. The end.