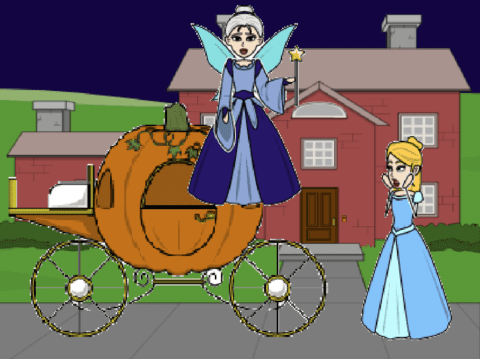 Everyone loves Disney’s Cinderella movie. I took my own spin on the story in my scratch animation. The original story by Charles Perrault features a young maiden who is forced to be a servant to her mean stepfamily. The Prince of the kingdom holds a ball to choose his wife. Cinderella’s stepfamily doesn’t let her go. However the Fairy Godmother comes to Cinderella and gives her a dress to wear and a carriage to take her to the ball. At the ball she meets the Prince. But there was a restriction, she had to leave by midnight. In the rush to get home, she loses her glass slipper. The following day, the Prince goes around to every lady in the kingdom trying the slipper on their foot to see if it fits. Eventually, he finds Cinderella and they live happily ever after.

But what if Cinderella wasn’t patient with her stepfamily. In my interactive animation, the viewer has the power to choose Cinderella’s path. If the viewer chooses to be kind, the original ending will play. But if the viewer chooses to be mean, Cinderella is prohibited to go to the ball and is locked in her room. Her fairy godmother doesn’t arrive, and her stepsister ends up marrying the Prince instead. For the rest of life she is forced into being her stepfamily’s servant.

To get to the final product, I first made a script, containing the dialogue and stage directions. Then I created a storyboards for the first act and each of the endings on storyboardthat.com. Finally, I created the finished animation on scratch.

Here is a link to the script and storyboards:
https://docs.google.com/document/d/1kauoH2DjSrGA_C7QZroaCG6r7iTbpf9u9rCx7aTi72Y/edit?usp=sharing