An Extroverted Introvert Who Loves Music and Is Good at Math 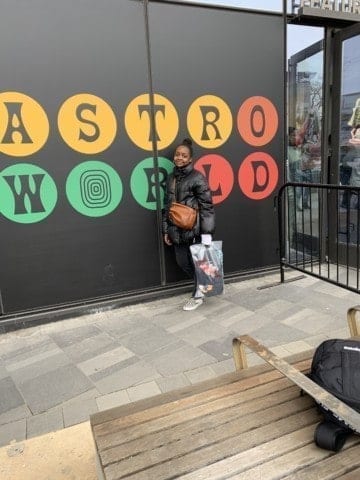 I am Chloè, like the french perfume. I am Jamaican and Senegalese. I am an extroverted introvert. Meaning that if I’m in an environment where I don’t know anyone, I won’t talk or socialize, but when I’m in an environment where I know at least one person, I won’t stop talking. I am very ambitious. I love playing piano. I am really good at math. So good that I took the Algebra I regents in eighth grade and passed with a 90 and am now taking an advanced math class. I love shopping, trying new styles and putting very bold outfits that make statements together.

I was born and raised in Brooklyn, New York. Something important that happened was that after 5 years of listening to his music, I finally saw Travis Scott in concert on March 3, 2019. I had gone with two other friends. At first, we had seats that were really high up from the stage, but one of my friends ended up knowing someone who was also at the concert who was able to get us General Admission floor seats. For those of you who don’t know what General Admission floor seats are, they’re the seats that are up close and personal to the stage. I was so close to Travis Scott, that we made eye contact and he smiled at me! I cried when he performed my favorite song, Way Back, because I was so overwhelmed with joy because I was finally able to go to one of Travis Scott’s concerts. It was something that I’ve been wanting to do since I started listening to his music back in 2014. Going to this concert made me so so happy, which is something that I hadn’t felt since September 2018.

I love to play the piano in school. It relieves my stress by the way the keys move under my fingers when I press down on them. I also enjoy poetry writing. I get to express how I feel on paper in a very creative way. I am particularly good at math. I didn’t really do anything to be so good at math. I guess it is just something I was born with.

Dear Chloe,
You were very blessed and lucky to be able to go the concert, not only go to the concert but to also be able to sit as close as you were. What exactly was going through your head when he looked at you and smiled. i can relate to you when it comes to music.i don’t know how to play an instruments but the piano which i’m not very good at. what type of music are you more interested into?
Did you do anything specific to be good at math. like studying or just gifted when knowledge? i personally struggle with math. i would appreciate any advice you have that can possibly help.

I actually don’t do anything specific to be good at math, I guess it’s just a gift. I’d love to give you advice or help you in math or anything that you need. Just let me know what you need help with and I got you <3

Dear Chloe :
I am jealous and happy about, your bio and how you described your experience in ASTROWORLD “<Chloè–BIO>,” because you got to go to a concert, i wish i would have gone i never been to one and its TRAVIS SCOTT!!!!! Like just seeing your idol is amazing. If i got to go to a Ariana Grande concert i’ll cry.

One sentence you wrote that stands out for me is: “ At first, we had seats that were really high up from the stage, but one of my friends ended up knowing someone who was also at the concert who was able to get us General Admission floor seats. For those of you who don’t know what General Admission floor seats are, they’re the seats that are up close and personal to the stage.” I think this is magnificent because you got to see him closer. Your idol so close to the stage, like i’ll be so shook, and it was your first time so it was a even more amazing experience.

Another sentence that I pasted was: “ I was so close to Travis Scott, that we made eye contact and he smiled at me! .” This stood out for me because HE SMILED AT YOUUUU, that’s such a cool experience i wish it was me.
Your bio reminds me of something that happened to me. One time my mom took me to a meet and greet to meet this Spanish artist named Romeo Santo and his very big in the latin world so i was so happy and when i met him i froze and was shook that this was happening.

Thanks for your writing. I look forward to seeing what you write next because you have cool and fun experiences and i know you personally.