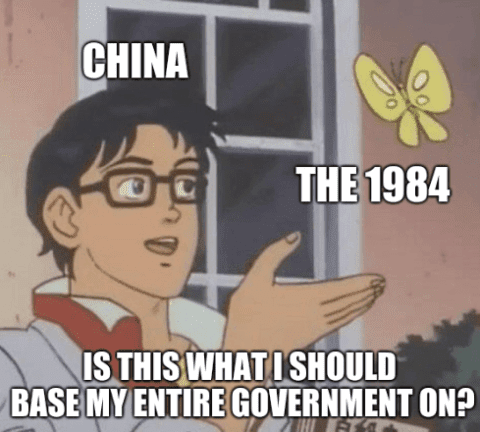 China has a fairly big problem, which is their surveillance. The Chinese government has implemented policies that start with surveillance and an artificially enhanced police force and end wherever the Chinese government wants it to. First, China has been putting out cameras and checkpoints left and right. There really isn’t more that you can say about that. Second, China has started to put into place a program that determines a citizenship score. Right now, the citizenship score associated with a national database of all you do is an opt-in program, but it will soon be mandatory for all citizens. This program already seems a little suspicious but it gets worse. China is augmenting this program with facial recognition technology that will allow for people to be tracked at a much higher level. If you have a friend with a low citizenship score, you will likely find that your citizenship score will go down as well. Third, China will be able to do anything it wants. It could easily sell information about its people to companies for data mining or it could get away with many wrong actions. We live in a world where Tiananmen square happened and the Chinese public didn’t know about it because the Chinese government sensors the public. China could use all of this information to more accurately silence protesters and not allow for any information about their dealing get out. Previous humanitarian shortfallings aside, absolute power corrupts absolutely, and any state with that much power over the people definitely has absolute power in that regard.

Now, this has obvious parallels to The 1984. I think that it has to do with a government that has an overwhelming amount of surveillance and a lot of problems associate with humanitarianism, but we could go further. First, the communist government of China has the slogan: “The masses have the sharpest of eyes.” This is pretty parallel to the idea that little brother is everywhere to snitch on even the slightest thing you do. Another alarming thing with China is that they plan on using a learning algorithm to predict crime and its perpetrators. I think that this is as close to The 1984’s thought police and thought crime as we could possibly get. Also, this will breed a society that will have certain “banned” sections due to people knowing that it would decrease their citizenship score. There are also areas of China that have more surveillance, similar to how some areas of Oceania are cared about more by the ruling class.

One solution to this problem would be to respond to the Chinese government by educating their people and forcing the Chinese Government to care about human rights more. This is something that would be extremely hard to do, so I would recommend the following: just share the message. Just tell people about the issue so that more people will care about it. Once there are enough people to share the issue, the ideas have to eventually flow through to China based on their globalization efforts to trade with other countries more, despite their desire to keep certain ideas from the Chinese public. This issue can only be fixed by the Chinese public, so they need to know that there is an issue before they can respond to the problem. The second idea I have is a little more interesting, at least to me. This is the basic concept of flooding a learning algorithm with false data making its predictions useless. The idea behind this is to combat the citizenship score. The Chinese public can’t have citizenship scores if the Chinese government has no way to deal with all the data. Also, this wouldn’t be too hard to accomplish. No system is perfect, and this learning algorithm will need a lot of input points, any one of which could be used to accomplish this feat. I think that if you combined my last two ideas, you would be able to combat the idea of this.

Here are some sources for if you don’t believe me (hyperlinks still don’t work on my computer):