Children Are Not For Sale

Home Children Are Not For Sale 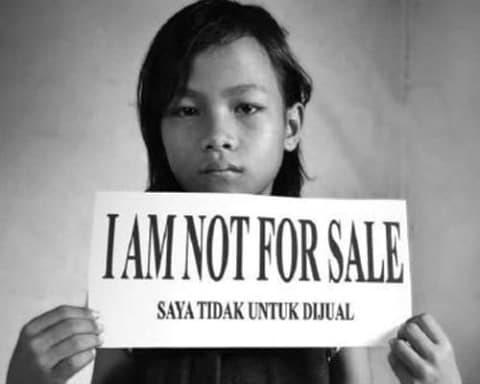 We chose to write to your organization because we want to help stop child sex trafficking. We know that by doing this we won’t necessarily stop worldwide child trafficking, but we believe that by raising our voices and standing up for the victims we are a drop on the penny of a big topic. We noticed that your organization would be a great ally for us because we are all fighting for the same thing.

There are many organizations that support child sex trafficking victims and educate others more about sex trafficking. All of these acts are all acts of social change. Social change is tactics that make an impact on an issue that people do to change the issue to better.  We analyzed tactics of social change that your organization used and we know that you used direct service because you are giving direct help to victims also people can go into clinics and get more information and get enlightened. Other hashtags that are popular in social media from Instagram is #humantrafficking which is a form of community organizing.  Marches and rallies were organized by the community and public to show their support against child sex trafficking.

Based on all the statistics of child sex trafficking we are planning to stand outside of Life Academy High School and have information about child sex trafficking and clinics that support victims. We will also be having a jar for donations for Westcoast Children’s Clinic. The stand will take place after school once all students are dismissed from class. We are also going to be attending every high school advisory at Life Academy and pass out flyers and announce that we will be outside of the school after school. Additionally, we are going to create an Instagram account where we will be posting our stand and also to have a platform where people can listen to what we have to say. The hashtag that we are going to be putting all of our posts under is #Childernnot4Sale. With this hashtag, we believe that we can come to a consensus with others. We are confident in our plan because most people aren’t aware of child sex trafficking or any resources they can use if they know someone or is personally affected by this topic. We are going to enlighten our community and convince others to join us to fight against child sex trafficking and those who contribute to it.

Thanks to your clinic that supports children you have made an action that will spread awareness about child sex trafficking.

Thorn is a child sex trafficking organization and shows different statistics they update yearly. Thorn is also in partnership with Google and Amazon. Thorn also works with non-profit, government, and law enforcement.

I appreciated that you guys share this with us, since it’s a big issue not only in Oakland it’s all over the world. I liked the fact that you guys add logos, pathos and ethos. This is a very interested topic but I feel you guys can add more logos about Oakland like, What’s the percentage of Child Traffic here in Oakland? What is the percentage of Child Traffic in African American community? How about Hispanic community? But you guys did a great work! Since you guys give methods to stop it.

Dear Erika,
Thank you so much for taking the time to read and comment to our proposal. The rates of child sex trafficking in Oakland is very high although we couldn’t find stats by we could do later research. But we would appreciate if you would also support us in our movement by donating. Thank you

My name is Tamiya’h and I am a student at Fremont High School here in Oakland. I just read your project blog post and I have some feedback.
One thing I liked about what you wrote was how serious you guys are about this topic, i like how you guys made it interesting with the percentages and stuff too.

Something I have a question about is where else do they sex trafficking at.

Thank you for sharing your project!
Tamiya’h

My name is Tania and I am a student at Fremont High School here in Oakland. I just read your project blog post and I have some feedback.
One thing I liked about what you wrote was how you made the reading interesting. I liked how you used percentages of the races that are being the most sex trafficked. I also liked how in your article you are describing ideas on how to stop the sex trafficking.

Something I have a question about is doesn’t Oakland have the most sex trafficking in the unity?

Thank you for sharing your project!
Tania

I appreciated reading your project proposal about ending child sex trafficking. I was glad to see that you provided some national data regarding child sex trafficking, however, I am curious to see what the rates are in Oakland specifically since you mentioned that it impacts your community. Do you know how prevalent it is in Oakland? Also, it sounds like you have found an important organization to connect with. Do you know how they will use the funds that you raise? What will they do to stop sex trafficking? What is their approach as an organization? Finally, I really appreciated that you want to raise awareness at your school by talking to students in advisory and after school. I also wondered if in talking to students you can suggest other ways that they can get involved beyond donating money.