Childish Gambino’s “This is America”

Home Childish Gambino’s “This is America” 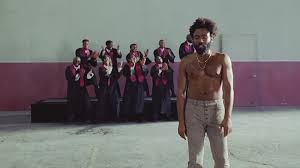 In Childish Gambino’s “This is America” video, Gambino is expressing about how America is right now by doing a video showing all the violence that is going on.

At the beginning of the video it’s showing a guy playing a guitar, then Gambino came out of nowhere with a gun then shot the dude in the head, had another person wrap it up like nothing happened. During the video, Gambino had taken out an assault rifle and killed church people. which connects to the mass shooting in the church that happened in Texas. Also, there were kids dancing right with him and pretending that they are having fun when more violence was happening in the background.

I know that Gambino has a reason why he wanted to make this video, but can there be a reason why he was running at the ending of the video? I would like to know how Childish Gambino had experienced gun violence in his neighborhood and if it affected his life as an American citizen.

I don’t really know why there were kids videotaping Gambino when he was dancing, and why the kids who were dancing after Gambino had put up a sign that looks like a gun.

“On the night of Jan. 8, 2017, the actor-writer-director-rapper-singer–stand-up Donald Glover attended the Golden Globes in Beverly Hills, California. To that date, the artist formerly known as Troy Barnes had, in a roughly decade-long career, won his share of accolades. But in terms of actual hardware, the prizes were largely second-tier: some TV Guide and Gold Derby TV Awards, a handful of more prestigious Writers Guild of America awards he’d taken as part of 30 Rock’s large writing ensemble.” https://slate.com/culture/2018/05/why-childish-gambinos-this-is-america-reached-no-1-on-billboards-hot-100.html

Dear Joshua,
this video caught a lot of attention because it does show so much that is still going on now in 2020. it hurts to see that not many things have changed through out the years. i want hcnage and i think people like us cna make that change, this was very powerful explanation of what the video is about which helps a lot to those who dont know.

This video is soo true right now it got everyone talking.

This video got me woke because this video has a lot of hidden meanings but yet not everyone sees the message and hidden meanings behind the video. However im woke so I know whats happening around me and im aware of all the stuff put in the music video.

There was a lot of subliminal messages in the video.

That video wilding, did you see all the subliminal messages in the background?