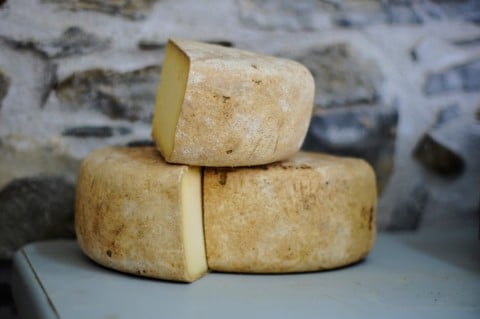 Cheese Rolling originated in 15th century England, but it is believed to go back as far as Pagan times.  Cheese Rolling has many festivals, restaurants and contests dedicated to it, such as taverns and pubs.  It is one of the most common British sports. It was officially canceled as a sport in 2010 because of health and safety concerns, the injuries can be very severe, but is still a widely played sport in communities.

To play the game of Cheese Rolling you need a large, steep hill, a nine pound foam replica of Double Gloucester cheese, and a large crowd.  The goal of the game is to cross the finish line first. There are four downhill races- three for men and one for women with a maximum of fourteen players per round, although some rounds have been played with as many as forty players.   The Master of the Ceremony starts the round by shouting “One to be ready, two to be steady, three to prepare (the cheese is released), and four to be off.”  The other players will run after it and try to reach the finish line.  The first person across the finish line is crowned the winner and is rewarded with the cheese.  A small prize for falling down a hill.

Absolutely wonderful. Just incredible. I am a big cheese lover. I am also a fan of friendly competition. Incredible post. Nothing more to add. The only thing that would delight me more is if they competed with real cheese instead of foam replica cheese.

Catherine, I absolutely love your topic!
I think it’s absolutely amazing and funny.