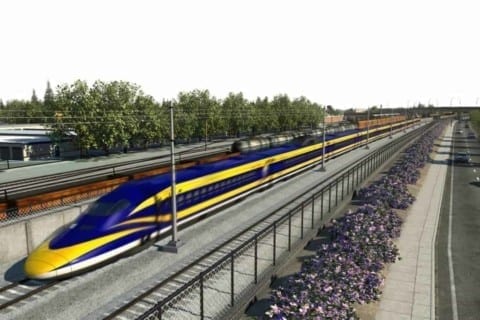 I just read a Wikipedia article:

I read this article because it talk about the bullet train which is the topic i’m going to be focusing for the senior project. I felt like this article was really helpful because it talked about the routes the bullet train will probably have and it gives a pretty good idea on how the train will operate. This is the article that not only it gives us an idea but it also talks about the people who are willing to be opposed.

One sentence from this article that stands out for me is: “Some cities along the Altamont route, such as Pleasanton and Fremont, opposed the Altamont route option, citing concerns over possible property taking and increase in traffic congestion.” I think this is not a so smart prediction  because in my personal opinion i believe that if we have a third way of transportation other than car, airplane and normal trains that will be three times faster than them people will take that any day.

I’m pretty sure this is accurate, because Delta airlines just had a glitch in their system and this caused thousands of flights to LA and all over the Nation,If we had a bullet train i’m pretty sure people would have already taken it instead of being stuck in the airport for two to three days. “Delta Flights Resume but Cancellations and Delays Continue.” CNNMoney. Cable News Network, n.d. Web. 15 Sept. 2016. http://money.cnn.com/2016/08/08/news/companies/delta-system-outage-flights/

Another sentence that I can agree with was: “A coalition that includes the cities of Menlo Park, Atherton, and Palo Alto has also sued the Authority to reconsider the Altamont Pass alternative.[8][9] More than one hundred landowners along the proposed route have rejected initial offers by the Authority,” This stood out for me because the landowners do not know what could they be missing out on having the bullet train pass by their city they could make money on making t-shirts on some kind of business that would bring money to their pocket and more people would come visit the city because they have a bullet train in their backyard.

I double-checked this fact through http://www.citylab.com/commute/2014/08/what-a-train-ride-from-los-angeles-to-san-francisco-taught-me-about-californias-high-speed-rail-future/375870/ which makes me feel pretty sure that it is true.

There’s something in this article that I think might not be accurate. It says, “and it seemed important to Charley Atkins, Travel Town’s late founder, to preserve California’s steam engine for future generations.’’.  I think this statement is not accurate, because of what I found “What a Train Trip From L.A. to S.F. Can Teach Us About California’s High-Speed Rail Future.” CityLab. N.p., 12 Aug. 2014. Web. 16 Sept. 2016., and here it says: <’’he Statewide HST System was to cost as little as $33 billion. [Note 4]   Now the Rail Authority has said it could cost nearly $100 billion to link San Francisco to Los Angeles [Note 5] and they have refused for the last decade to update their projected cost for the entire statewide system.’’.

What I learned from this article is that building the bullet train will affect everyone statewide and it will benefit everyone by making the traffic flow smoother and it will give everyone a fourth option of transportation. People may think that this won’t work and it will just be a waste of time and money but we will never know until we actually have it.

My name is Micheal,
I agree with the statement “building the bullet train will affect everyone statewide and it will benefit everyone by making the traffic flow smoother and it will give everyone a fourth option of transportation”. Within my city I see that more and more people are using other forms of transportation but a good chunk are reliant on the CTA or the Chicago Transit Authority which provide buses and trains for the citizens of Chicago. My associates and I are attempting to reach out to said CTA and asking if high school students in the state of Chicago could receive a UPASS which the CTA already provides for high school students. We were wondering if you have any data on the amount of students who rely on public transportation as we can use said data to support our thesis that the students require a UPASS.

Dear Tomas,
I agree with you.I liked the part where you said” This stood out for me because the landowners do not know what could they be missing out on having the bullet train pass by their city they could make money on making t-shirts on some kind of business that would bring money to their pocket and more people would come visit the city because they have a bullet train in their backyard.” I really like this because it shows that people who have issues with the bullet trains have a way to benefit from it so you took out the counter argument. We should have a bullet train here in California because everyone can benefit from it. We can have faster transportation to other parts of California without taking an airplane. This leaves me with a question. How safe is the bullet train and how dangerous is it? Compared to other modes of transportation, what are the benefits and defects of it?