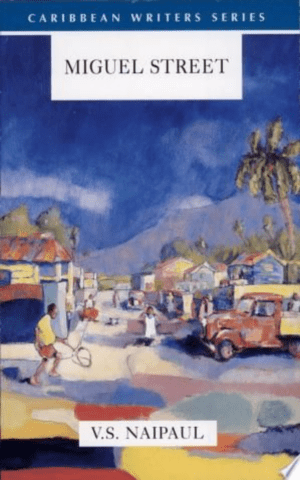 The narrators of each chapter face certain forces and pressures. They all battle with their goals and want to accomplish them but some go through abuse. They meet these forces and pressures by deciding to do nothing with their goals and ambitions so they face realities by not pursuing them. You can see this in every chapter of the book but one example is on pages 94 and 95.

The tension rises when one of the main characters decides to leave Miguel Street. This might leave a reader feeling happy. The narrator is given the support to leave their hometown to do so much more with their life.

The book climaxes when they decided that they want to leave in the first place but they have to figure where. “‘You getting too wild in this place. I think is high time you leave.’ ‘And go where? Venezuela?’ I said. ‘No, not Venezuela. Somewhere else, because the moment you land in Venezuela they go throw you in jail. I know you and I know Venezuela. No, somewhere else.’.”

The falling action ultimately resolves the conflict. They are given support from their family to leave and go to New York with all of its opportunities. It’s a person v. society type of conflict that’s driving this story. The readers see a lot of toxic masculinity on Miguel Street and the readers also see how little ambitions the people on Miguel Street have. By one of the narrators deciding to leave it breaks that story of living there forever with all these unaccomplished goals and instead of making a difference in their story. They are chasing their dreams and change which does not happen often in the book.