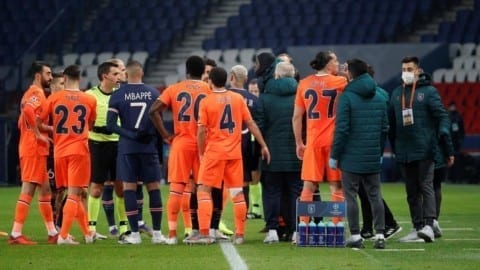 The Champions League is one of the most-watched tournaments in the world big teams, like real: Madrid, Barcelona, and Liverpool play.

An incident just happened a ref called a player ¨black¨ and he got very offended by it. Both teams then stopped the game until they got a new official to ref the game. They did not want him.

The teams and players want people to know that racial discrimination should not be allowed in FIFA or in around the world. They then stopped the match completely and left the pitch.

Dear Morgan,
I am impressed by your post, ” Champions league” because I didn’t know about the incident that happen with the ref.

One sentence that stands out to me is ” Both teams then stopped the game until they got a new official to ref the game”. I think that it’s good that both teams decided to not play with that ref.

Thanks for writing. I totally agree that they should of stopped the game. Thank you for the information in this article.

Dear Morgar,
I found your article and it seems very interesting because that never happened avia that is crazy I think that watching the game would be crazy. I would like to know more about what happened.

Hey Morgan, I found this article pretty dope. The situation currently happening is insane and watching it would be pretty amazing. I would like to know who scored and how many fouls there were throughout the game. Was there any biased fouls throughout the game Morgan?
One Sentence that stands out to me is when you said, ” An incident just happened a ref called a player ¨black¨ and he got very offended by it.” This can be very sensitive for the player because of 2020 and what has been going on. Racial inequality has been a major event throughout the year.
I totally agree with you that racism should not exist in soccer or in any other sport. I believe and stand with what your saying. Thank you for this informative article and such a movement can be created so there won’t be racism throughout any sport.

I am interested in your post because I watch the Champions League and I’m a big soccer fan. I also heard about this when it happened, and I was surprised by it.

One sentence you wrote that stands out for me is: “The teams and players want people to know that racial discrimination should not be allowed in FIFA or in around the world.” I think this is great because it’s setting a good example for racial issues in the future. I am glad that you are writing about this and I’m also glad that the players took a stand to this.

I agree with you that racism has no place in soccer. One reason I say this is because soccer should not be a game of racial bias. Another reason I agree with you is that I’m pleased that you took an interest in this, like I have.

Thanks for your writing. I look forward to seeing what you write next, because I liked this post, and I hope you write something like this in the future. I also want to know if there are any other incidents like this happening elsewhere.

Hey Morgan, I find your article very interesting! This situation is crazy, watching the game would be crazy. I would like to know what happened after that game, Did they ever talk about the situation, Did the ref get fired? i will be looking forward to your update, Thank you!