Challenges facing the women of India 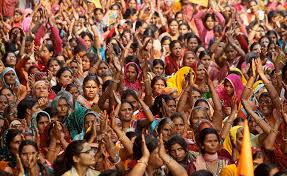 India has become a very special place to me and is very close to my heart. I travelled there this past December and think about it everyday. I learned a lot while there; things ranging from what it is like to be a girl in this country to what the Hindu gods stand for. The thing that had the largest impact on me was the girls I got to meet. While here, I got to learn more about the girls my age there and what their life is supposed to look like according to the Indian culture. Reading about crimes against women and hearing personal experiences first hand are both extremely devastating. But I believe this devastating and sad topic is one that needs to get more light shone on it because of the grand issue it is. I began reading all about challenges being faced by women in India and after meeting these beautiful women I have been interested in looking deeper into it. I have started to research about some of the major challenges that women do face and found articles with very interesting and alarming things.

Some challenges that women face in India range from high infant mortality rates, to extremely low literacy rates, to violent crimes against women including rape. A poll has rated India as the “the world’s fourth most dangerous country for a woman, behind only Afghanistan, Congo and Pakistan.” There are notable differences about how girls and boys are treated by their family members and their community.  This can include things from the food they are allowed to eat to their education. Most girls are just brought up to be a housewife to then get married by her teen years and leave home with their new husband and his family. They are born into a constant cycle of discrimination and being considered as a lesser individual. In fact, an article I found says, “From the time they are born — or not born — and continuing till late in life when they become wives or mothers, it’s a vicious cycle . of discrimination, and violence keeps on continuing.”

There have been several reports of rape and other violent crimes against women and there are more than likely thousands that go unreported or unnoticed. Some really alarming crimes against women include young girls being raped by groups of men and then left to deal with their injuries alone. In addition to these crimes, baby girls that do not initially get aborted are left in heaps of garbage because girls are viewed as a burden and can be costly when they must be married away. It is not a privilege to have a little girl here and reading about the amount of women deaths they experience really makes me feel.

Women have been battling against discrimination since the beginning of time. In history, women are viewed as lesser than men. To help combat this issue there have been organizations formed and people speaking out about the injustices and unfairness of the treatment of women, especially in countries like india. It’s encouraging to read about the progress the country is making after reading about all of the awful things that are an everyday thing here. It’s hard to face the reality that these women in the other side of the world deal with such devastating problems simply because they were born a girl but I am left with lots of hope hearing that the problems are improving. In an article I found it talks about how, “Indian women, in some ways, have also made some strides. Literacy rates have gone up, maternal mortality rates have gone down, and millions of women have joined the workforce.” It offers a lot of hope to the women of India that “authorities acknowledge that action is needed and say they are taking steps to try to better protect women.” Acknowledging that there is an issue is the first step to solving or beginning to solve a problem this large.

It is a tremendous burden to bear even in thought and solidarity with women in India (and other countries) for whom these injustices are common. I love your post because it gave me an insight into the plight of these women. I think this is important to highlight because it helps us to be aware of issues that affect women and I hope that it serves as a catalyst to bring change to the world. One thing that stands out for me in your writing is “Acknowledging that there is an issue is the first step to solving or beginning to solve a problem this large.” This is vital to us becoming more responsible for our world and those in it.

Ceceli,
What a moving topic to discuss for your research essay! It’s crazy to think how much of a big deal the wage-gap is in America when in other countries there’s no wage-gap to begin with because women are hardly ever even in the work face. Any time I learn new statistics about other countries, it makes me realize how inadequate the problems Americans face are. I think that adding more statistical evidence, and less opinion would be more effective in your research essay. I think the first and last paragraphs can include some personal opinions, but the rest should be solely based on evidence. Although, I do see how this may be hard to do since you’ve firsthandedly experienced the discrimination against women in India. The article- https://news.impactalpha.com/women-are-rising-to-indias-challenges-cda7555f723f?gi=51fb4d7f95a1 talks about the rising of women in India’s workforce, and I think it would give you some great specifics to add into your essay!
Jenessa

Ceceli, I loved how passionate you are about this issue. You can really tell it through your writing. It is crazy to think about how privladged we are to live in such a safe and oportunistic envrionement for women. Why do you think that they treat women the way the do? Is it because of their religon, or is it just because they are a less developed country? I thought about those two questions while I was reading your post. I found this article that talks a lot about every day life in India for a women (even though you already probably know much about it). https://www.cnn.com/2013/01/12/world/asia/india-women-challenge/index.html Good luck with your project! It is a very interesting topic.