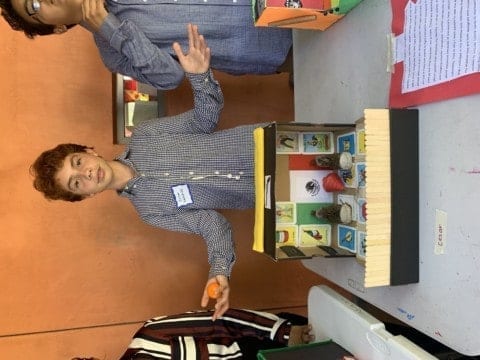 The objects that are included in my shadow box represent my identity, my own counter narrative. When people look at me, they see a short, cisgender boy with light skin and red hair. Many people assume that I am white because I am light skinned. That I am just a male that wants to fight everyone and someone that is mad all the time because I am a male. These are stereotypes about people that assume my identity. In other words, the people are creating counter narratives. Counter narratives could be made about someone because of someone’s race, ethnicity, or nationality. This is why I want people to see me as the identities that I included in my shadow box. Identities that I have included in my shadow box are both assigned and chosen identities. I have chosen to include loteria cards to represent my race as Latinx even though race does not genetically exist. Another reason for why I included loteria cards to represent my ethnicities s Mexican American. Loteria cards are separated, some cards represent music, others plants, and other cards represent animals. The counter narrative that I am trying to make people know about my identities are that I am a fun person, short but brave, and light skinned but Mexican American.

I really liked how you added your background and the things that represents you in your box! I love all of the Loteria cards a lot! I think it adds not only colors to your box but more information about yourself! From your box, I can tell that you are a fun and bright person. Thank you for showing your box! I love it that you show your background a lot in your box, we need people like you in this world to show how proud you are with your background. I hope you never stop representing your Mexican culture. I enjoy reading your description, thanks for showing your box to me! 🙂

I’m a student at San Jose State and thought you did an amazing job representing your roots and your culture in your shadow box. I am familiar with the Loteria cards game and thought that was such a creative way to express your culture as they come with a variety of different Mexican traditional items. I enjoyed reading about your experience and how often other people seem to assume your ethnicity by the way you look but most of the time they’re wrong. For example, my parents are Mexicans and people often think my sisters and I have different parents because their skin tone is lighter and mine is darker. I also appreciate how you included a picture of yourself and described how other people see you but explained who you are. Thank you for sharing your Identity box!

I am so glad I was able to read about you and I really admire your shadow box! I am Latina, so I could easily understand and strongly agree that are there are many stereotypes that people use to make a judgement or assumption about a Mexican person. Just as men are seen as dominant and agressive, Latinas are seen as weak. I also agree that people assume that all Mexicans have to have a certain skin complexion and I also feel that some people picture other people from a certain culture and instantly think of the characteristics they will have. For instance, I have a darker complexion with black hair so when I meet people they always ask if I’m filipino.

I really liked that you included the Loteria in your shadow box because its a special and traditional Mexican orginated game. Overall, I really like your shadow box and thank you for including a picture of yourself, I know sometimes people are shy so thanks!

I am happy about your photo and art work “My Identity Box”, because you’re being brave by showing your true self even though you get bullied you still try your best every day. One special item you have that I really like is the Mexican Flag and toys because you’re telling everybody that you’re not white but a true Mexican. This makes me excited because I’m also Mexican and we can connect experiences like playing Mexican games and talking about the Mexican culture.
Another part that I saw was the gun which you put to describe how colored people are seen. This stood out to me because everybody thinks colored people are criminals when we are actually peaceful human beings. Your artwork reminds me of my shadow box and life because all my life I’ve been seen as the bad guy for being colored and Mexican making me feel dismal when in reality I’m not as bad as what people describe me to be. The inside also shows how Mexicans are fun and peaceful humans to be with. That connects to Oakland because Oakland is very diverse and special. I tried to base my box of Oakland and colored people to show people what they think about us and how I counter their opinions upon us like getting good grades and being responsible. Overall your box has a lot of meaning because your telling everybody what’s true about yourself and what’s not which can be hard for people, especially an oppressed group of people. Thanks for your art. I look forward to seeing what you make next, because I want to see more artwork involving the Mexican culture and oppressed groups of people. Not only that I want to see what other skills you have other than good art work. And again thanks I really liked your shadow box and hope you read my comment.