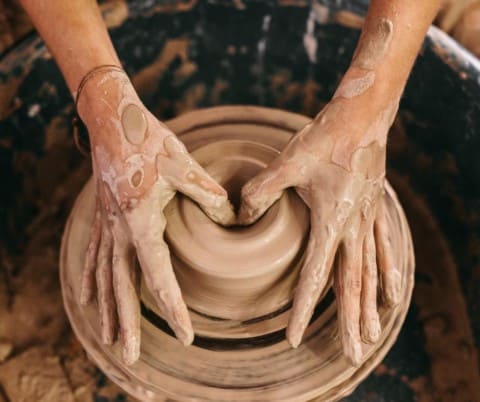 This article from Deneen Pottery gives a brief history of ceramics. Ceramics has been around since 29,000 BCE as one of the world’s earliest inventions. In early civilizations across the world, clay was easy to access and became important because of its utilitarian functions. The first potter’s wheel was invented in Mesopotamia sometime between 6,000 and 4,000 BCE and revolutionized ceramics as pottery began shifting from purely functional to artistic expression. The mechanical wheel was invented in the 19th century when electricity allowed potters to become much more productive. In the last twenty years, technology has impacted ceramics with the introduction of electronic programmers to control the temperature and power of the kiln, as well as pressing as a form of mass production.

In an article by Hugh Prysten, the fourteen step process for hand-thrown ceramics is outlined. First is sourcing clay, as different clays have very different properties, and then wedging the clay to get the clay consistent and force air bubbles out. The next step is to center the clay on the wheel, which can be done using a variety of different techniques. After the clay is centered, the desired form can be thrown, cut off the wheel and placed on a board. The pieces should then be covered with plastic and allowed to dry for one to two days, or until “leather hard.” At this point, each piece should be trimmed, either on the wheel or by hand, to create a foot and remove any excess clay. After signing the piece, it should be allowed to dry completely, until “bone dry.” Once the pieces have dried completely, they will bisque fired and then glazed. Finally, the pieces will be glaze fired in a wood, oil, gas or electric kiln, and sanded to remove any sharp edges.

In this New York Times article that claims that “Pottery is the New Pilates,” Penelope Green explains the many emotional benefits of ceramics. Snippets of interviews from the New York City studio Bklyn Clay show that many people use ceramics as a way to cope with stress in their lives. For some, ceramics can be considered a form of mindfulness because “there are so many subtle movements that require attention and precision,” and clay requires presence in the process. Others like the physicality and technical difficulty of pottery, especially because there is a tangible result of their persistence. The Co-Director of Bklyn Clay claims that not only does clay absorb emotion, but it is also great for Freudian sublimation, taking socially unacceptable ideas and putting them into a socially acceptable form, like ceramics. Regardless of why people are increasingly turning to ceramics as meditation or therapy, clay is a positive thing for both individuals and a community.

Hello Amy! I’m glad you’re doing Bettin justice, and talking about something that I can see you truly appreciate. Personally – with almost no knowledge of the subject – it was very interesting to hear about the process of ceramic art as well as the history behind it. The second paragraph talking about a general from for the creation of poetry was especially interesting and I would love to learn more about that. The American Ceramic Society did an interesting article on the history of ceramics that might be helpful when you write you paper. Here is the link to that article: https://ceramics.org/about/what-are-engineered-ceramics-and-glass/brief-history-of-ceramics-and-glass
Best of luck!