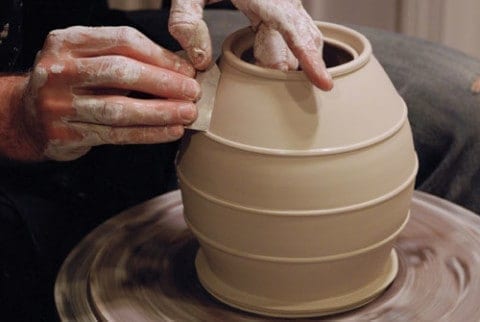 In an article by Laura Beeston, various ceramic artists comment on the line between art and craft in pottery. Artists are finding themselves having to justify their materials more than ever, despite the fact that clay is one of the oldest. Rachel Gotlieb makes an argument for the relevancy of ceramics in the modern world by saying that “it’s a reaction to and against the computer screen.” It is increasingly important to “have a tangible connection with the materials and objects” in a digital age. There has been a recent resurgence of handmade ceramics in the last few years for a variety of different reasons. Descarrega and LeBlanc-Murray are celebrating the imperfect nature of ceramics by deliberating creating wobbly forms. Jenn McCurry and Lynne Mulvihill argue for the slow nature of ceramics, which can help develop patience in an instant gratification society. David R. Harper simply says that “the versatility of dirt allows for some pretty phenomenal object-making.”

In a paper titled “The Centrality of Ceramics In African Cultures,” author Diana Roberts writes about the importance of pottery in Africa. Until recently, there has been a lack of African ceramics in Western galleries and museums. Emily Hanna, the Curator of the Arts of Africa and the Americas at Birmingham Museum of Art, comments that “African ceramics are central to daily life and their production and function tie contemporary African life to the ancient past.” Pottery is important for cooking, serving, and storing food and beverages, and is used in various rituals and burial practices. Each culture has a distinctive style, and patterns symbolize many different ideas. In her new gallery, Hanna will focus on the wide range of form, function, process, and aesthetics found throughout Africa. Collaborating with Dick Jemison, Hanna has acquired a rich body of works that allows for both aesthetic breadth and in-depth study of particular forms and processes.

In the introduction to “Ceramics (As Containers)”, the authors asses why ceramics is considered important as an area of study. They claim that currently, there are two different understandings as to why ceramics is worthy of an archaeologist’s attention. First, is the sheer quantity of ceramic, but this is an unconvincing argument for importance. The other argument is that “ceramics are considered a key feature of human material culture because of what they are taken to represent in economic, technological, and evolutionary terms.” The ability to make and use pottery can be considered a revolutionary point in various cultures, however, the authors argue that this is no longer as valid because of evidence of pre-Neolithic ceramics. Instead, the authors argue that ceramics should be studied as containers first and foremost, alongside baskets, gourds, and metal vessels. They argue that their “perspective draws upon ideas from socio-cultural anthropology and elsewhere concerning the category of ‘containers’ and practices of ‘containing’ while also adopting an archaeological approach that is long term and ‘developmental.’”

I loved reading your post Amy! I am in ceramics this year and really underestimated the amount of skill it takes to create something worth keeping. I found this article that I think you would enjoy! https://www.metmuseum.org/learn/educators/curriculum-resources/art-of-the-islamic-world/unit-seven/chapter-one/the-importance-of-ceramics

Amy, I love ceramics and thoroughly enjoyed reading about these different papers. Perhaps my favorite one was “Ceramics (As Containers)” because it acknowledges how ceramics has molded (no pun intended) how we learn about past cultures. The Utah Museum of Fine Arts has a few exhibits on ceramics and it would be an interesting thing to check out!

Great post, Amy! I found it very interesting when you talked about the human culture of ceramics. Based on your post I think you would enjoy reading this article. https://ceramics.org/about/what-are-engineered-ceramics-and-glass/brief-history-of-ceramics-and-glass.