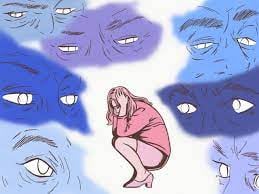 Nearly everyday, celebrities appear in the news, whether it be to bring them down or hype them up, but more often than not, these stars struggle with the constant pressure of their peers, fans, and managers to look and act a certain way.  They either conform or go against the pushed labels. However, it isn’t such an easy decision to make, and many factors need to be considered.  Although not all have been able to stray away from the molds created for them, several celebrities strike down conformity by following their own values and interests instead of trying to please the public.

Public image has long since played a major part in a celebrity’s success.  However, the pressure to maintain their reputation often ends in poor mental and physical health.  For instance, “an estimated 20 million women and 10 million men in the United States suffer from an eating disorder” and a portion of that number are the celebs who constantly receive criticism from the public (Firman).  The numbers are terribly high due to the unhealthy beauty standards that for so long have been drilled into this society.  Fortunately, body positivity has become a popular topic and works towards reform, but the idea that being thin was the only way to be beautiful was a parasite for too long and lingers to this day.  Not only did these stars struggle with their figure, but also they had to worry about their words and actions.  Specifically, women have had to face the dilemma of being “respectable” or being “indecent”.  To elaborate, in the past the expected portrayal of female stars, especially those in the music industry, meant being “pure” and “innocent”.  They were simply “expected to set an example to kids” to be polite and modest (Snapes).  This kept them from voicing their opinions and being true to their own values in fear of upsetting the public, putting them under immense pressure which is harmful to their mental health.  For a long time, they suffered and endured the constant criticism, but several women grew tired of being kept in a box and decided to finally express themselves.

One way in which they chose to do so was through clothing.  This garnered immense criticism due to several women choosing to wear more revealing clothing.  However, one pop star of today, Billie Eillish, did not participate in the trend.  She decided to wear quite the opposite, oversized and baggy clothing.  Several “editorials praised Eilish’s ‘total lack of sexualisation’, [but] she denounced them for [degrading] her peers” (Snapes).  She appropriately reminded the press of the offense of their actions and comments and that the other artists shouldn’t be shamed for simply not wanting to dress like her.  Her behavior was baffling to most, but is completely reasonable in the sense that how one decides to dress should be based on their own preference and comfort and not on others’ opinions.  Sharing in Eillish’s beliefs yet not in clothing style, fellow singer, Lizzo, has stated that “‘people [should be able to] wear whatever…they wanna wear’” and that “she’s exhausted by the cruelty that permeates online culture” (Elizabeth).  With valid input, Lizzo fittingly fights the shaming culture and encourages others to live for themselves as she does.  Thankfully, there are others with these same values and, hopefully, one day people will no longer judge but simply encourage one another to be true to themselves and not worry so much about others’ opinions.

In sum, celebrities have faced many challenges with public standards and, fortunately, many have rejected the unrealistic expectations and, instead, lived by their own principles.  This step is only the beginning and should allow others to follow suit.  Not only should other leading figures speak up, but the common people should do so as well.  Society needs improvements, and, hopefully these values of self-expression and self-confidence will continue to spread and foster positive growth.

Dear Isabella,
I am fascinated by your post, ¨Celebrities and Public Standards¨, because there are a few people who actually talk about this certain topic. It’s also very fascinating because not a lot of people come to understand that these musicians live a tough life with constantly living up to a certain standard.
One sentence that you wrote that stood out to me was, ¨Specifically, women have had to face the dilemma of being “respectable” or being “indecent”. I think this is very unfair because this front that women have to live up to is not aimed at men. Compared to men,  women are constantly judged for their bodies and attitudes which I think is something that everyone needs to overlook because it is extremely unfair to women.
Thank you for your writing. I look forward to seeing what you write about next, because I really like the way you write about things that aren’t talked about a lot. I would like for you to continue doing this.

I am amazed by your post, “Celebrities and Public Standards,” because it opens the eyes of the public to the fact that celebrities are regular people as well with the same emotions and feelings as everyone else. It shows that celebrities might look all “glam” and “dazzling” when in reality, they feel pressured and stressed to look and act a certain way.

One sentence that stood out to me is, “This kept them from voicing their opinions and being true to their own values in fear of upsetting the public, putting them under immense pressure which is harmful to their mental health.” Celebrities are in a way, “forced” to live up to the publics’ standards because if they don’t they’ll ruin their reputation. With this stress in mind, they are put under a lot of pressure which negatively affects them.

Thank you for your writing, this post really opened me up to a new perspective and i definitely look forward to reading your next post.

I am startled by your post, “Celebrities and Public Standards,” because many people don’t understand the pressure a celebrity can have. It may be hard for celebrities to look ‘famous’ because most of the time they want to please people instead of being their own self.

One sentence you wrote that stands out for me is: “An estimated 20 million women and 10 million men in the United States suffer from an eating disorder” I think this is not very healthy for celebrities and instead of pleasing people they should not be so impressive and be themselves.

Thanks for your writing. I look forward to reading more about celebrities to understand more of their situation and what they go through.

I am fascinated by your post, “Celebrities and Public Standards,” because it greatly addresses that even though celebrities are famous, people shouldn’t disregard their emotions.

One sentence you wrote that stands out for me is “ For instance, “an estimated 20 million women and 10 million men in the United States suffer from an eating disorder” and a portion of that number are the celebs who constantly receive criticism from the public (Firman).” I think this is important to know because not only do individuals around the world suffer from these disorders but so do big-time celebrities and models.

Thanks for your writing. I look forward to seeing what you write next because your topic was very informative on mental and physical health problems.