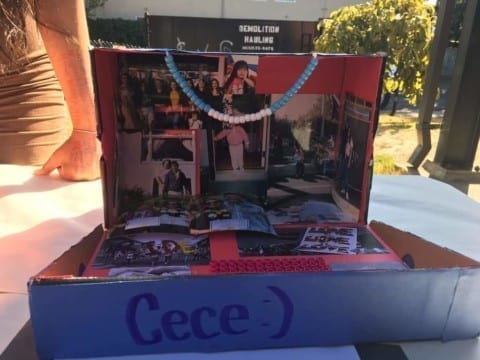 My chosen identities are so different from assigned identities. Some of my chosen identities are that I chose to be an older sister, to be a good aunt, I also chose to be a LGBTQ+ activist. A few of my assigned identities are that I was born female, I’m the youngest sibling, and I’m 14 years old. I chose to put these 10 pictures/illustrations/artifacts because they show that I’m not what society thinks I am. The baby pictures of me and my family represent that I am the youngest sibling. The counter narrative of the pictures are that I have a family to care about and a family who cares for me so I’m not some kind of Latina that has no one to look up too so that’s why I act out. Many people assume that I’m Mexican but in reality I am Guatemalan. That is why I put the Guatemalan flag in beads because I want to show my ethnicity and I also want to show where I’m from so people don’t assume that I’m something else. When someone looks at a Latino/a they think that they are Mexican. On the bottom of my box I put some pictures of LGBTQ marches and the bisexual flag because I want to show people that I get to chose my sexuality not them. When people look at me they think that I’m straight just because my gender expression is more feminine than masculine. I also put the picture that said “Love is Love is Love” because I want people to understand that it doesn’t matter who I love because love is the same no matter who is the one giving it.

I admire you for not being afraid to show the world who you really are. I like that you mentioned that people always assume that any latinamerican is Mexican. I have been learning a lot about other countries in central and south america and I think it’s a beautiful diversity. Also, in this new world we have made progress with LGBT+ rights and with people like you we will continue to better this world. I think your box is beautiful and what it stands for even more. If you could add one more thing that means a lot to you, what would i be?

Dear cece,
I really enjoyed reading your artist statement bc i can really relate and iv also became a LGBTQ activist. Your box is very colorful and i see how its really important to you in many ways.

Dear Cece
I am very satisfied with your work , with your images , because it show us who you are and how much you are proud of your identities , one thing that i like it about your letter is how you explain very well and i think it is very clearly . thanks for your writing