I believe that teachers have a negative impact on student lives such as bad teachers and toxic environments such as school and or parish. We all know that kids will always remember their favorite teacher or administrator but we all remember that one teacher and or administrator that completely ruined school and had such a negative impact. Now these teachers shouldn’t be teachers and I will explain why I think so.

The reason I say these words is because these teachers in a way made us feel as if we were stuipd as if we felt targeted in a way or were flat out not to usel. We have these teachers that we could never go up to because they made us feel this type of fear of going up to them or such as asking a question and the teachers not really even explaining the sleeves instead of helping they just blow them off. But on top of that teachers don’t care about mental or physical health. Evey teacher as always said that they were a teenager once which is true but i feel like as if being a teenager in there time was different and the way we dealt with things were different we were taught differently

A statement I found that can help prove that bad teachers affect lives. https://www.brooklynmathtutors.com/the-long-term-effects-of-ineffective-teachers according to this article about how math teacher shows’ that lack willing to teach and and try showed adults in their 30’s and 40’s, were still convinced that they were bad at math due to experiences they had in their formative years. It was too late to change their minds”. This shows the impact I had on students 20- to 30 years out of school that they still don’t believe is good.

Recently, I read Facing the Lion, by Simone Arnold Liebster.  I enjoyed and appreciated this book. The author, Simone shares her experience of being a Jehovah’s Witness during a time where they were banned. Although being threatened many times, Simone stayed faithful and loyal to her God. she always looked to her God, Jehovah, for help and relied on him, to endure all her persecution.

The significance of the setting shifting from her home in Alsace to the Wessenberg’s Reformatory for Girls is that speaking to her classmates was not permitted, and she was forced to do physical labor while looking after and taking care of a little girl in her school. She didn’t have much opportunity to read her bible, and she barely learned anything educational wise. Simone faces certain forces and pressures. At age 13, she was forced to help cook for all the students in her school, while sewing and patching up holes in old socks, and forced to do laundry, while babysitting a naughty five-year-old girl that always tried to get her in trouble. Simone had to make her bed and help wash with her laundry as well as clean her teacher’s bedroom and bathroom. She had to do all this in total silence, and on an empty stomach, the food rations were barely enough. She wasn’t allowed privacy, and her personal belongings, gifts and letters from her family were often taken away from her. She had to read her bible in secret, if she got caught she would have been punished with hand whippings. She meets these forces and pressures by deciding to follow all of her teachers instructions, praying to her god and secretly reading her bible when she has the chance. You can see this early in the memoir on page 102.

The tension rises when her mother and father are both arrested. Her father was first sent to the Dachau concentration camp, then later sent to Mauthausen, a harsh penal camp meant for exterminating inmates by means of extremely hard labor. Her mother was sent to the Gaggenau camp, and they both faced many hardships. This was all happening during a war between Germany and France, so this made it even harder for her aunt to visit and to give any updates on her parent’s conditions.

After Simone receives a letter from her mothers prison mate, instead of the letter coming from Simone’s mom herself, and after sending many letters to her father without getting a response, she believes that they are dead. it’s understandable for her to react this way and jump to conclusions because of all the chaos of the war going on and constantly hearing war machine guns. Because of this, more restrictions and precautions were taken at her school. All the changes no doubt  gave Simone a lot of added stress, fear and sadness, it must have been hard for her to think positive at this time. “One day, I received a letter from one of Mum’s prison mates. Why didn’t Mum write? I suddenly feared the worst. Surely she was dead. Dad hadn’t written either; he too must be dead. Maybe aunt eugenie was killed in the battle of alsace, and perhaps Bergenbach was burned to the ground! Frightful images flashed through my mind.”

Thankfully, Simone’s prediction of her parent’s death turns out to be  false. Although in rough conditions, sick and malnourished Simone gets to see her parents again. The happy family is reunited, after the war ends.

I am the ferry. I go to Manhattan because it is my job everyday, because I have to take people to work on time.  I am beautiful because people feel comfortable and satisfied because they arrive faster than the train. Watching the landscape, the sunset, sky, I think I am the happiest ferry that exists because the people on board feel good and they arrive safely at their destination. When it rains, people cannot enjoy the beauty of nature.  I am a means of transport so that people arrive on time to their jobs every day. The rocks are like my protectors and my security because they tell me where I have to go.

Rocks by the river

One place I love is Mexico. Mexico is my home country and where my parents are from. I feel like this place is better than New York in many ways. Its quietness is very satisfying and I like the way in the mornings you feel safe to walk around because you are not alone. On Sundays, for Mexicans it’s an extra work day or a day for people to go shopping. Mostly everyone puts up a tent on Saturday to claim the space in which they would sell on Sunday. On Sundays there is a crowd of people around the church in order  to get some of the goods that people are selling. They sell from food to toys and clothing. Tourists would like to go out on Sundays because that is when it is the most interesting. The parks over there are different. Not only do they involve swings and slides but they also involve carousels which you have to push yourself. Over there you won’t see the roads you see in New York but in their place there is a sand/dirt covered street. Over there you don’t get judged by the amount of money you owe but you get judged by how much effort you put in and how much you care about your family. In Mexico, you don’t have to have money in order to be known. You have to be unique and a good person. The soccer fields in Mexico are larger than most soccer fields in New York and when there is a soccer game almost everyone wants to watch. In Mexico there are parties almost everyday and the parties are mostly safe unless a lot of gangs go. Overall I love Mexico the way it is.

Falling In Love With Soccer 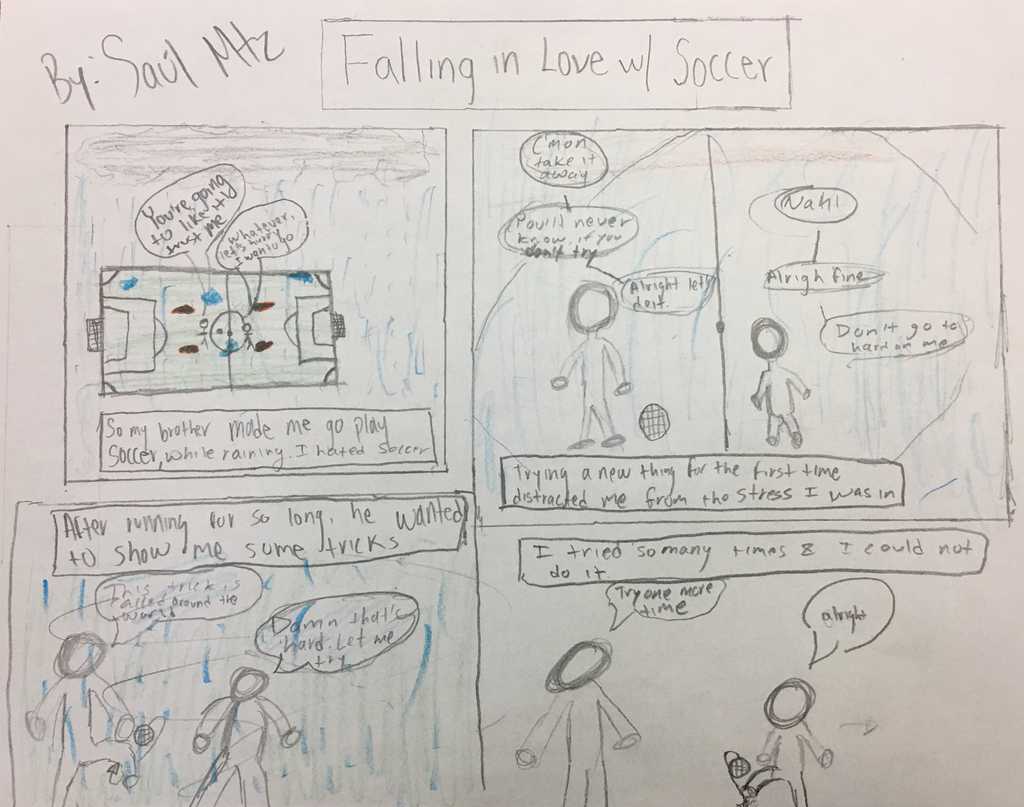 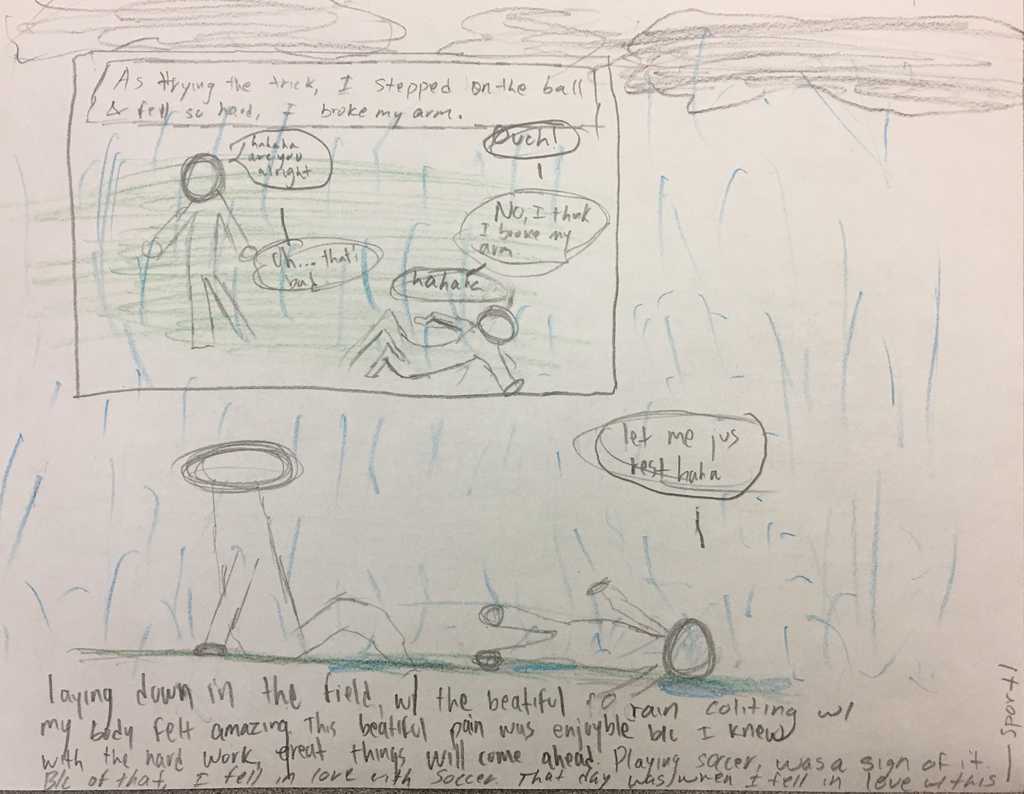 A Day in my Life

A Day in my Life

Everyday in park are same people and same thing in park it was so boring but one day is totally different.It was beautiful day because that day in park they have pakistani mela and all celebrities are together in park .All singer are singing their song they have such a beautiful voice. Actress are giving us speech about our country.Also actress are dancing on stage.People took picture actress.And they have a lot of fun .In end of the day they gave us dinner and everybody enjoy the mela and we never gonna forget this day.Party was finish and everybody went home.

A Day in My lIfe

My day has many emotions in it and I love how being in New York makes this possible.

The heart of the earth, made up of our community of people

These photos are taken in one of the hallways of my school. I chose my school because it is one of the places where I spend the most time and I feel more comfortable and welcoming. (Click on any image to enlarge them.)

These photos show the heart of the earth, made up of our community of people. Here you can see how the main veins of the heart are fed by our community, also the sunlight and the moon are supporting the heart; and the importance of trees and the environment for the planet and for us.

Family and Friends at Playland

A Day in My Life

This weekend I went with my family and friends to Playland. We had a really great time. (Click on any image to enlarge.)